Previously, we looked at the first segment of a whimsical four-part video posted by Michael Crawford at Progress City, USA. The video was a celebration of Walt Disney World’s Tencennial and offered several B-, C- and D-list actors vacationing at The Vacation Kingdom.

Theme Parkeology (theem pahrkŏl’ə-jē) = the study of details, minutiae and history of theme parks. Akin to the archaeological study of human habitation, theme parkeology looks at the often layered and detailed surroundings. Theme Parkeologists relentlessly pour over the tiniest scraps to glean any information about an area of a theme park, past or present. (Term first coined by the original Theme Parkeologist, Jeff Pepper at 2719 Hyperion.) 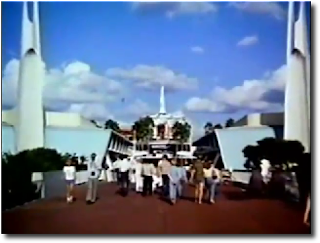 Our first shot is a wonderful view of the old entrance to Tommorrowland. Notice the spires and lack of rock work? Also, the light blue walls on either side of the entrance had waterfalls cascading down them. On the left side, where we have Stitch’s Great Escape, you could have experienced Mission to Mars from 1975 to 1993. On the right side, from 1979 to 1984, you could enjoy the CircleVision 360 film Magic Carpet ‘Round the World. Now we can visit Monstropolis at the Monters’ Inc Laugh Floor. 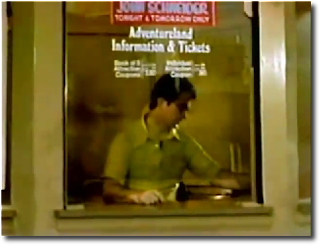 This is a shot of an Adventureland Ticket Booth. What is strange is that, according to the video, the kids entered Tommorrowland to get to this booth in order to get tickets to a John Schneider concert being held at the Magic Kingdom.

Widen Your World has a fantastic Adventureland page.

To the south, an original Magic Kingdom ticket booth operated until 1980. It later became a merchandise outlet called the Adventureland Kiosk until 1985, when it was renamed Bwana Bob’s – a reference to Bob Hope, the hilariously unfunny man who made a safari-themed film entitled “Call Me Bwana” in 1963 and also presided over some of the WDW opening ceremonies in 1971. 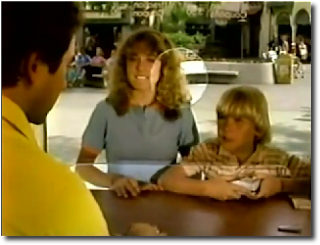 Look closely and you can see some great details of Adventureland: the trash can, cement planter/benches, the archways and details on the building behind the wildlife (the tree…not Dana Plato). 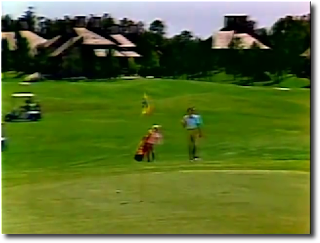 Ricky and Dean, posing as your typical 1982 son and father pairing, take on one of Walt Disney World’s golf courses. Notice the Fairway Villas in the background. Foxxfur, from Passport to Dreams Old & New has compiled the most comprehensive information about the Lake Buena Vista area. She posted an amazing four-part article at 2719 Hyperion detailing the growth, changes and oddities.

And Disney was building again in Lake Buena Vista – this time to the West of the Lake Buena Vista Club, East of the Treehouse Villas, nestled comfortably between four golf holes – the 10th and 11th to the east and north, and the 17th and 18th to the west and south. Because of this, these became known as the “Fairway Villas”. Lake Buena Vista Story, Part Two (Foxx has posted some stellar images of the Villas in this post.)

I urge you to spend some time ingesting all of Foxx’s articles. There will be a test on Monday!