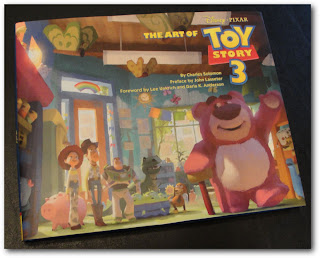 Charles Solomon, an internationally respected animation historian and critic, has crafted a fantastic look at the creation of the final installment of the Toy Story trilogy. Solomon has authored several Disney-related titles and has contributed to numerous articles about animation. We have covered several of his titles at Imaginerding:

Charles Solomon is well-positioned to write a book about the creation of an animated film from Disney. He is one of the few authors/critics that has been allowed access to the Animation Research Library at Disney and his intimate knowledge of animation carries this book to higher levels.

The Art of Toy Story 3 is a beautiful book. Every time I read a book in the Art of… Series published by Chronicle Books, I wish that similar books had been published about all of the classic Disney films. The books in the series are beautiful and provide absolutely stunning artwork. In most cases, it is hard to distinguish whether the art or the included text is more important–both offer amazing insights into the creation of the films. This book does more than just provide artwork from Toy Story 3

; it also provides a look at how the other films were created. In many cases, there are fantastic side-by-side images. Solomon was able to interview many of the artists from the previous Pixar films to discuss how the art and story have evolved.

In the age where technological prowess is often trumped over the art of the films, it is a joy to see that the roots of such a technologically advanced art form still start with a pencil and paper. Solomon brings his view of traditional animation and applies it to the creative forces behind this computer-animated blockbuster.

Throughout the book, Solomon brings to life the struggle that the artists had when dealing with bringing well-loved and well-known characters back to the screen. The Toy Story toys are characters that we have known for the past seventeen years. Even though technology has grown, the artists still needed to make sure that the toys looked and acted the way we have come to expect them to.

When creating a believable story, the artists of an animated feature have so many more details that need to be discussed that are completely in the hands of the animators and support staff. Besides dialog and character design, you have the opportunity to create new worlds. Especially new worlds that fit seamlessly inside the Toy Story universe. There is a lot of discussion in the book about lighting, colors and the emotional responses of color; there was quite a bit of red during the dump scenes and lots of yellows, blues and greens in Bonnie’s room.

The Art of Toy Story 3

is just as enchanting as the film and adds so much more depth and detail to the characters and the stories behind the film. The anecdotes that Solomon presents about the filmmakers are wonderful and will be cherished by researchers and enthusiasts for years to come.