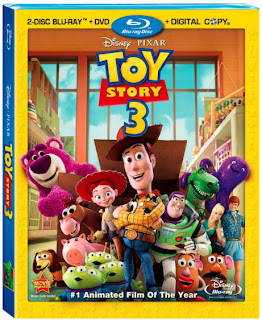 Over the past year, Disney has really stepped up the features on their Blu-ray releases. I was blown away by the recent Beauty and the Beast features and I was really looking forward to what I would find on the Toy Story 3 Blu-ray

. I wasn’t disappointed. A lot of the features really spoke about crafting the story and the artwork instead of focusing on the technology. When you think of a Pixar film, you assume that everything is crafted inside of the digital world. The behind-the-scenes features on the Blu-ray really show how much hand-drawn artwork goes into the movie.

by Charles Solomon–it is an amazing companion to the film.

The Rides – This is probably one of my favorite segments of the features. We get to go behind-the-scenes to see concept art and models for the latest theme park addition: Toy Story Land.

John Morris – a spotlight on the voice of Andy from all three Toy Story films.

Cereal Bar – a charming look at Pixar by its own animators.

Lending a Voice – The major stars of the film discuss their role in the Toy Story film.

Dancing With the Stars – a very cute feature that looks at the creation of a special dace.