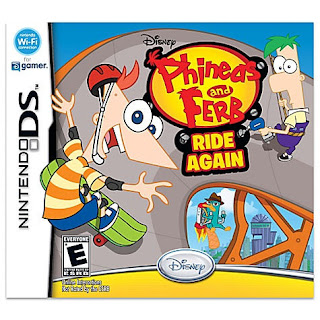 We are major video game players at Imaginerding. Two Xbox 360s, a Nintendo Wii, two Nintendo DS (one is a DSi XL), two computers and two android-based phones all provide a constant stream of videogame goodness in our home and on the go. We jumped on the opportunity to play through a review copy of the latest Phineas and Ferb game for the DS.

This review was texted to me by my eleven year-old son. I think he was making fun of me…

This sequel to the original game is far easier and more fun. But remember, this is one of those games where you have to go back to earlier missions to beat the game. It is menat for solo players doing the campaign. It is meant for ages three through thirteen and twenty through forty-five. Only play if you do not have a very complicated mind. Do not overdo it! Warning!!! the next section is for deeks only! Alpha deek could not beat mission one! Hahahahahahahaha! I am on mission three! Deeking off! Oh! I mean: Connery signing off!