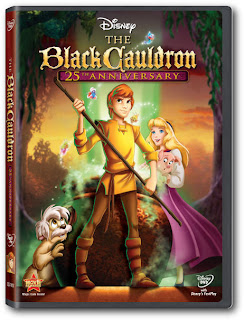 One of the most maligned animated films from Disney, The Black Cauldron

has been released for a second time on DVD. Created during a critical transition period for the Company and the Animation Division, The Black Cauldron is seen as a passing off of the baton moment for the new animators and the new management. Many of Disney’s Nine Old Men had retired or were getting ready to leave; new animators were ready to show off their new style and chops. The management team of Eisner, Wells and Katzenberg were ready to reinvent filmmaking at Disney. If you search the interwebs, you will find plenty of critical discourse about the film. I want to discuss my families thoughts on the film.

The Black Cauldron, Walt Disney Pictures’ 25th animated feature-length film, celebrates its 25th anniversary with a Special Edition DVD release September 14 from Walt Disney Home Entertainment. Based on Lloyd Alexander’s Chronicles of Prydain books, this mystical, action packed adventure debuts just in time for Halloween. The film tells the story of Taran, an apprentice pig keeper with dreams of becoming a great warrior, who embarks on a quest to find a magical and powerful Black Cauldron before the evil tyrant Horned King can possess it for his own diabolical purposes. Fantastical characters like the oracular pig Hen Wen, the willful princess Eilonwy, and the droll but annoying Gurgi face witches, elves, magic swords and other obstacles. As they journey through these thrilling escapades, Taran begins to learn the true meaning of what it is to be a hero.

We watched the film over a three night period before bedtime. Both boys enjoyed the action of the film, but they even commented that the film had no heart. My oldest stated that it just didn’t seem like a Disney film. To me, it was missing a cohesive story line. It really seemed like there was way too much packed into a short film. It is also one of the first animated films to not be released as a musical; the soundtrack is a more traditional orchestral score.

And don’t get me started on Gurgi! Every moment he was on the screen, I got the feeling that he was the token Disney Cuteness for the darker film. I even wondered if he was George Lucas’ inspiration for Jar Jar Binks!

2 thoughts on “I Do Beseech, Knowledge That Lies Beyond My Reach”