Sometimes, finding information on early Walt Disney World can be quite daunting. If it isn’t covered by Mike Lee’s Widen Your World, Foxxfur’s Passport to Dreams, Michael Crawford’s Progress City, U.S.A. or Jeff Pepper’s 2719 Hyperion, there are chances that the information does not exist. It is possible that the photos or check-in documents have not been uncovered from someone’s vacation files, yet, so we keep our eyes open! Regardless, when a good mystery or question comes a long, it is difficult to give up the scent!

Previously, we looked into discovering what background information we could on the Fantasy Faire Stage in the Magic Kingdom at Walt Disney World. What started out as a simple post to help identify a photo quickly turned into a mega-post that pulled information from various web and print resources.

One of the resources I consulted for the article was the First Edition (1996) of Disney A to Z: The Official Encyclopedia by Dave Smith:

We were able to secure copies of the Second and Third Editions of the Encyclopedia and I was very excited to see that the entries had increased in size.

Disney A to Z: The Updated Official Encyclopedia, Second Edition (1998):

They added the “e” to the end of Faire and the information about the stage being renamed Fantasyland Pavilion at some point. I assumed that it was between 1994 and 1996 due to the information uncovered during the research for the first post. In this case, I have times guide from a 1994 visit that still calls it the Fantasyland Faire Stage.

Disney A to Z: The Official Encyclopedia, Third Edition (2006)

Fantasy Faire Covered area, also known as Fantasyland Pavilion after January 1995, originally used for outdoor stage shows in Fantasyland in Magic Kingdom Park at Walt Disney World, and later for addtional seating  for the Pinocchio Village Haus. It closed in 1996.

Thank Goodness for the Interwebs

Joe Shelby, one of our readers, left a comment with a link to his Picasa album of photos that his parent took in 1972-1974. I copied the photos, retouched them and added the URL to each one. I want to thank Joe for sharing these with us.

Take a moment to compare Joe’s shot from 1972-1974 and the photo from 1985. It looks like the steps were removed which had the effect of creating a much larger stage. Or, the stage was enlarged, thus necessitating the removal of the stairs. Or, too many people were bum rushing the stage to get at Cinderella’s larger than life mice! 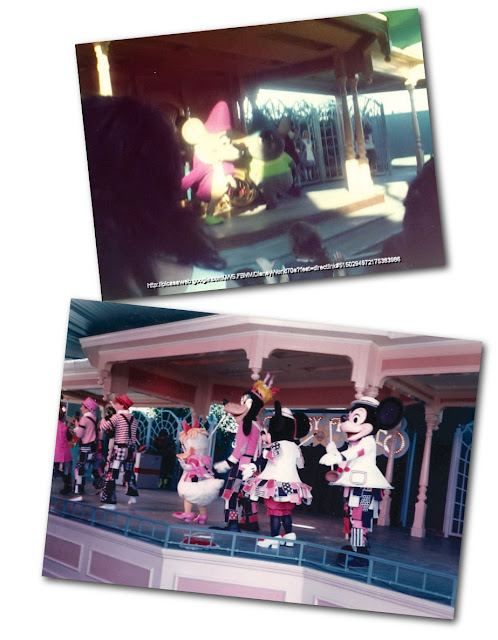 I do urge you to get a copy of the Third Edition of Dave Smith’s excellent Disney Encyclopedia; it is an amazing resource to have on hand! If you do own the First or Second Editions, it is worth the price to obtain the Third Edition.

One thought on “Fantasy Faire Resurgent”