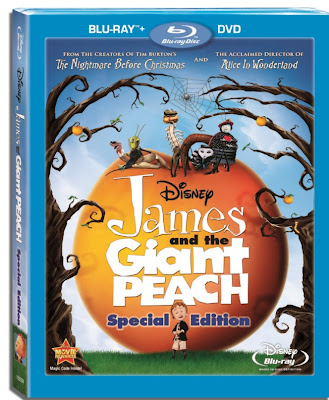 Fresh on the heels of Disney’s release of Tim Burton’s Alice in Wonderland is James and the Giant Peach, a spectacular stop-motion-animated film based on the book by Roald Dahl.

I am not sure what qualifies a release as a Special Edition any longer. I am assuming that being released on Blu-ray constitutes the status of Special Edition, since there aren’t many extra features that are different from the earlier DVD release. Regardless, the film is a wonderful visual treat on Blu-ray.

It is an excellent addition to any burgeoning Blu-ray collection!

In an all-new special edition from Tim Burton, the acclaimed director of Alice In Wonderland, comes the astounding film that captured the hearts of fans and critics all across the world. Inspired by Roald Dahl’s beloved children’s book, Burton, Denise Di Novi and director Henry Selick combine a fascinating mix of live-action, stop-motion animation and computer-generated special effects to create a world beyond your imagination in James and the Giant Peach: Special Edition for the first time ever on Disney Blu-ray + DVD Combo Pack.

After the daring rescue of a spider, a young boy named James gains possession of some magic crocodile tongues. When James spills them in the garden, out sprouts an enormous peach! Climbing inside, he meets an astonishing cast of characters and embarks on a magical odyssey full of thrills and adventure. Voiced by an all-star cast, including legendary actors Richard Dreyfuss, Susan Sarandon, Simon Callow and Jane Leeves, and featuring the celebrated music of Randy Newman, this classic story is delicious entertainment for the whole family!

• Spike the Aunts Interactive Game – New BD Exclusive! Inspired by the game that plays after the end movie credits, try your hand at spiking the evil aunts with the rhino and ring up major points!

• Production Featurette – A look at the making of the film.

Why don’t skeletons play music in church?
Because they got no organs.