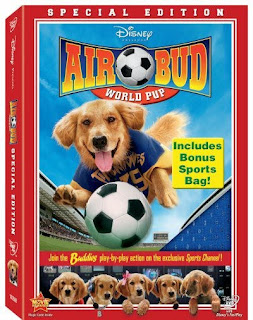 My oldest son is a huge fan of the Air Bud series. He promised to write a small review for Imaginerding. After his daily Xbox 360 time, he sat down to pen a few thoughts:

Personally, I’d recommend this movie to families, sports fans, Disney fans and dog lovers across the world. The Air Bud movie#1 started off as a single sport then depending on the sports time calender they make a movie out of it. Such as they made the first one during the NBA championship and made it basketball themed. The second was made during the Super Bowl and was football themed. This one was made during the World
Pup!Oh! Sorry! World Cup and it was soccer themed. It is completely amazing and definitely worth the MOOLAH. With a cute sense of romance and laughs this movie definitely takes place on Ruff grass. From the wicked villains to the charming dogs. This is a sure keeper. 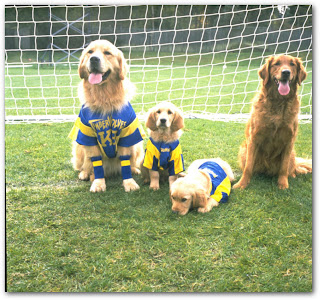 The whole family will get a kick out of the spectacular Special Edition of Disney’s timeless canine adventure AIR BUD: WORLD PUP, including the all-new exclusive bonus, The Buddies’ Sports Channel: Soccer Edition – and including a free limited edition sports bag to continue the fun after the film is done!

The world’s most talented pooch is back in a heartwarming and hilarious sports adventure. When Buddy meets Molly and they have puppies, the hotshot hound is in for an all-new challenge, but the fun is just  beginning. This exciting family favorite features Buddy joining his teenage owner Josh on the field in pursuit of the state soccer championship. From the creators of Santa Buddies and Space Buddies, the new AIR BUD: WORLD PUP SPECIAL EDITION will give audiences of all ages something to cheer about!