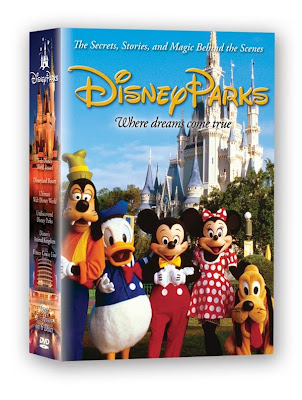 Information from their press release follows:

Finally, the “Disney Parks: The Secrets, Stories and Magic Behind the Scenes” Single DVD contains:

“Disney granted us unprecedented access into their theme parks, resorts, and attractions which has allowed us to present over five hours of programming that reveals incredible information and imagery,” said Andy Perrott, President and Executive Producer of Lightship Entertainment. “Working closely with Disney Parks, we proudly present over five hours of the most definitive collection of insiders information and imagery on Disney’s theme parks, resorts, and attractions.”

I have many of these on my DVR and I can’t wait to get hold of a hi-definition copy!

Addendum:
I spoke to my contact at Questar and he related the following information to me concerning any new or additional footage from the Travel Channel shows:

The short answer is that ALL the footage from the Travel Channel airing is included, PLUS some extended scenes that were not on the Travel Channel, as well as some special bonus features that have never been seen before, such as “Stitch’s Great Escape” and “What’s New in the Haunted Mansion.”