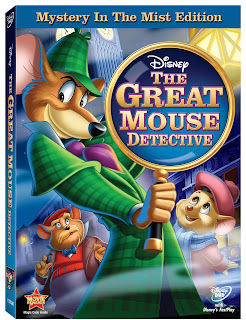 The Great Mouse Detective (Mystery in the Mist Edition)

Walt Disney Studios has released the Mystery in the Mist Edition of their 1986 theatrical film, The Great Mouse Detective. If you do not already own a copy of the film on DVD, this is a great opportunity to add it to your collection.This is the fourth release of the film (laserdisc, videocassette and DVD) and Disney has added a featurette about Sleuthing. Included is The Making of the Great Mouse Detective, that was included on the previous DVD release. The documentary does not age very well, but it is an interesting look at the characters behind the voices. Plus, you do get to see two of the animators with awesome 1980s hair! 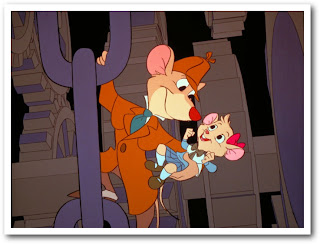 The Great Mouse Detective is lauded for several reasons. They claim on the Making of documentary, that it is the first animated feature to use computer when The Black Cauldron

actually is (is this another attempt to hide The Black Cauldron?). The technique that was used involved the backgrounds being layed out on the computer. The backgrounds were printed and then colored. Still pretty labor-intensive! It is also a feature that was worked on by the team of Ron Clements and John Musker; you know, they did The Little Mermaid, Aladdin and The Princess and The Frog! 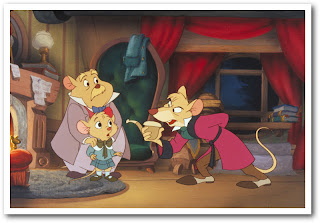 Overall, this is a very cute film that clearly shows the direction that Disney Animation was heading before the second golden age of animation. Ratigan, voiced by Vincent Price, is the villain that you love to hate; he is perfectly evil and charming nonetheless. The Great Mouse Detective is a very charming and light-hearted film. It is not Disney’s Masterpice, but it is a film that can be enjoyed by the whole family. It might be one to inspire some sleuthing of your own!

One thought on “The Game’s Afoot!”