On a research trip to Walt Disney World, the Imaginerding research scientists were led on a Fantastic Tour of Forgotten Walt Disney World by Foxxfur from Passport to Dreams and Peter Rabbit from Luau Cove Marina. Part of the tour looked at the buildings that remain the Saratoga Springs Resort from the Village Marketplace days. We headed through the side of the Artist’s Palette and passed the Turf Club restaurant. We stepped outside onto the patio dining area and turned right to head down the cement walkway that led to the right of the building.

When we reached the bottom, we were faced with the following view: 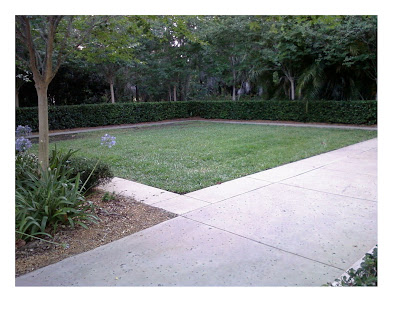 Image taken with my camera phone.
Why would there be a grass rectangle bordered with cement? After we walked around it for a few moments and ruminated on the layout, we realized that it was the former pool for the Lake Buena Vista Clubhouse. It seemed that it might have been cheaper and easier to fill it in.

We took some more images. There is a set of benches in the area that look over the small grass area that would change the focus of the area. It created a place you could bring the kids and let them run around for a few minutes. You could also relax and enjoy the view of the Sassagoula, sort of. 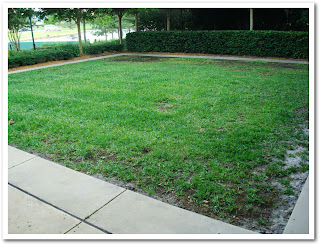 The image below is taken as a 180 degree view from the picture above. You can see the area for the golf cart parking on the left and the snack shop on the right (blue awning). The level of the building you can see through the trees is underneath the Turf Club restaurant. It is an amazing ode to 1970s Walt Disney World: The Pro Shop. If you get the chance to visit, make sure to walk through the shop; you will be amazed at the large wood trim, metal casing and 1970s style. 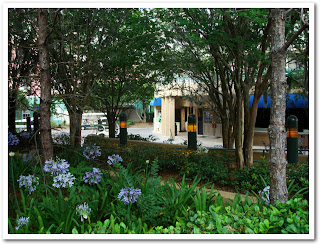 The following is a satellite image of Saratoga Springs and the Lake Buena Vista Golf Course. The dark ellipse shows the filled-in pool area. 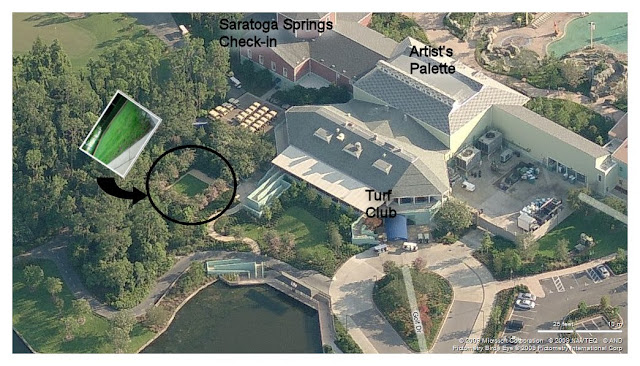 This is a scan of a picture from page 119 of Walt Disney World, the First Decade

. We believe that the pool was much larger than the filled-in rectangle we see today. There was also a set of locker rooms located behind the area. This pool was probably used by people playing golf and by the Villa residents located close by. 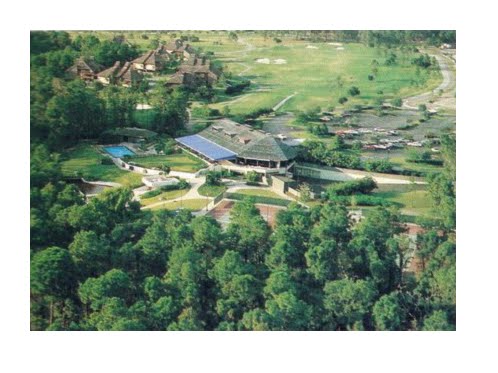 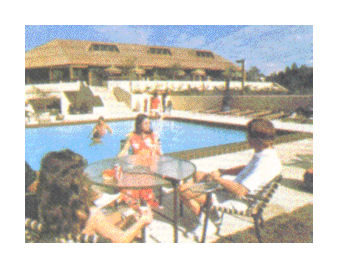 The above image is borrowed from Alison’s Walt Dated World page on the Lake Buena Vista Golf Club. The pool was much larger back in the day!
Don’t forget to stop by our site and leave some Disney Geek love!

8 thoughts on “Theme Parkeology: What’s That?”