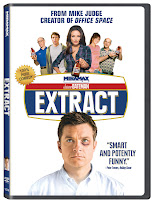 I am a big fan of Mike Judge (Office Space

, King of the Hill

), so I was very excited to receive a review copy of his latest film, Extract. The previews and commercials during the Labor Day release painted an almost slapstick film with pratfalls and gags. The film serves up some of my favorite actors (Jason Bateman, Kristen Wiig) in some great roles; I just felt like something was missing. It was a good story but I finished the film wishing for more. Extract is a Miramax Films and Walt Disney Studios Home Entertainment release. 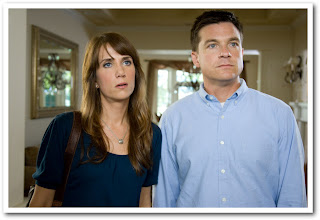 Here is the official synopsis:

Joel Reynolds (Jason Bateman) is sitting pretty. With a beautiful wife, a comfortable home and the almost finalized acquisition by General Mills of the culinary extracts business he has built with his loyal lieutenant Brian (J.K. Simmons), Joel seems to have it all. Except his wife is about as interested in him as she is in her career (supermarket coupon design), his employees want a piece of the pie and the sweet young thing with designs on him (Mila Kunis) is really a wily con-artist. On the advice of a drug-addled confidante (Ben Affleck), Joel cooks up a scheme to cheat with impunity by hiring a gigolo to seduce his wife—only to discover the young object of his affection is behind a lawsuit by long-time employee Step (Clifton Collins, Jr.) that will scotch the General Mills deal and leave Joel penniless. The best-laid plans unravel with hilarious results in this off-the wall comedy about life in the not-so-fast lane.

We enjoyed the film, but we weren’t heads-over-heals excited about it. Mike Judge excels at crafting incredibly believable characters and inserting them into complacent and mundane situations. In hindsight, I wondered if this film is the result of Mike Judge seeing himself as a manager, trying to take care of his people,  instead of an office drone. In Extract, we see a manager trying to craft a successful company with a crew of oddballs–the opposite of Office Space where it is an attempt at a group of ragtag employees trying to break free of corporate shackles. I was hoping that Extract would have the same quotable lines, humor and cult status as Office Space or Idiocracy,but it told more of a tale than Office Space. I really felt for Jason Bateman’s character as he suffered through his own coming of age story–he was the loveable underdog that had no idea how good he had it until it was almost gone. Add this one to your Netflix queue or just rent it; it is good, but not one that I would need to own.