Jeff B is one of my favorite amateur photographers on the web. I have featured his photographs before and I really appreciate his artistic vision.

The shot below is a great look at Spaceship Earth at Epcot. I asked Jeff B to tell us some more about how he created this stunning photograph. 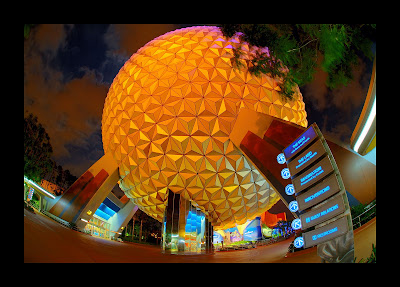 http://bighugelabs.com/onblack.php?id=3997929266&size=large
Where and when did you take it?
The camera was very close to the direction sign that is in the lower right hand side of the photograph. This is just past the leave a legacy display at EPCOT. It was taken slightly after closing and I was fortunate that no one walked through the frame and there were no stray strollers left in the area.

How did you set up the shot?
The photo was taken with a fisheye lens which really distorts straight lines near the edges. This creates the curved ground and exaggerated curves on the Spaceship Earth’s legs. It also produces an incredibly wide view. I purposely shot off to one side (in this case the right side) to a) get close up to the direction sign which increases the photo’s depth and b) to include the building that houses Project Tomorrow. My camera was mounted on a tripod and shot using a shutter release cable.

Was there any inspiration for it?
Yes, I was trying to capture that futuristic vibe and colorful glow that Future World (particularly around SSE and Innovations Plaza ) exhibits in the evening.

How did you artistically retouch the photo?
I shot the image 5 times using different exposures each time (-3,-2,0,+2,+3). The images were combined and tone mapped using Photomatix to produce what is commonly known as a High Dynamic Range image. I pushed the color balance pretty far to the warm side. The image was then transferred to Photoshop where there was some further local increase in color saturation and then finally sharpening.

You can see more of Jeff B’s photos at his flicker stream.
Don’t forget to stop by our site and leave some Disney Geek love!

One thought on “Spaceship Earth by Jeff B”