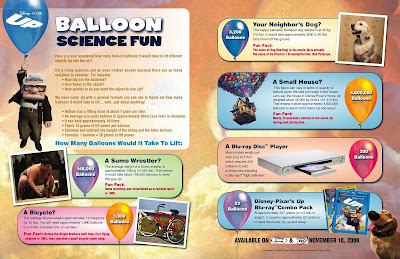 Here is another Activity Sheet from Disney/Pixar that you can print out and share!

How Many Balloons Would It Take To Lift:

Your Neighbor’s Dog?
A happy Labrador Retriever dog weighs in at about 32 kg (70 lbs). It would take approximately 3200 balloons to lift this furry friend off the ground.

The voice of Dug (the Dog) in the movie Up is actually the voice of Co-Director / Screenwriter, Bob Peterson.

A Bicycle?
The average bicycle weighs approximately 19 kilograms (or 42 lbs). You will need approximately 1,900 balloons to turn a 2-wheeler into an air-bike.

Before the Wright Brothers built their first flying airplane in 1903, they operated a small bicycle repair shop.

A Sumo Wrestler?
The average weight of a Sumo wrestler is approximately 148 kg (or 326 lbs). That means it would take about 148,000 balloons to send this guy Up.

Sumo wrestling was established as a national sport in 1909.

A Small House?
This figure can vary in terms of quantity of balloons given the size and scale of the house. Let’s say the house in Disney/Pixar ’s movie Up weighed about 46,000 kg (that’s 101,413 lbs). That means it takes approximately 4,600,000 balloons to send Carl’s home Up and away!

Nearly 70 animators worked on the movie Up during peak production.

You can read my review of the book The Art of UP, here.