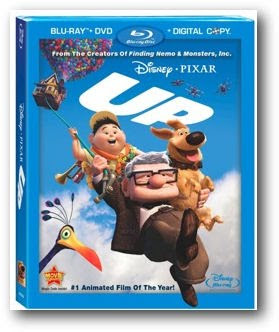 I won’t be posting a review of UP in this space; countless other bloggers and media outlets will be raving about it. Needless to say, if you didn’t have the chance to see UP in the theaters, then you do need to see this movie!

Instead, I want to discuss the extras and why you should buy the combo pack–even if you don’t own a Blu-Ray player, yet.
Dug’s Secret Mission:
This is an amazing Pixar short that is, woefully, too short. It takes place right before Carl and Russell meet Dug and it ties wonderfully into the film. It will have you running around yelling “Squirrel” all day!
Partly Cloudy:

The hilarious short film that preceded screenings of Up. Everyone knows that the stork delivers babies, but where do the storks get the babies? The answer lies up in the stratosphere where the cloud Gus is a master at creating “dangerous” babies, which prove to be more than a handful for his local delivery stork Peck. Directed by Pixar story artist, animator and voice actor Peter Sohn.

Adventure is Out There:

We weren’t sure what to expect when we watched this documentary, but it turned out to be one of the best parts of the UP experience. The whole family mentioned that it made the tepui seem less fantastical and much more grounded in reality. We could relate to the flora and the environment of the South American scenes. Plus, it was fun to see all of the Pixar employees getting wet and how their drawings, sketches and paintings evolved into UP.

Blu-Ray/DVD/Digital Download Combo Pack:
I have received review copies of the combo packs before and I absolutely love them! Basically, you get a Blu-Ray copy with all of the extras that only a Blu-Ray can provide, along with a DVD version of the movie (with some of the extras) and a digital version that you can watch on your computer or portable device. Everybody wins! You can have the DVD version for the kids’ room or the car, the Blu-Ray for the good television and the digital version on the laptop so the kids can watch it on the flight to Walt Disney World. The Blu-Ray disc does contain ten additional features, behind-the scenes bonus features and games. Hours and hours of additional entertainment.
As a special bonus, here is a sheet provided by Disney/Pixar for your little adventurer (or yourself), entitled Adventures In Your Own Backyard! 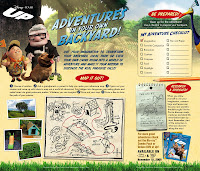 Click on the image to see a larger version.

This movie will be a favorite for many generations to come and is helping to define character animation in the digital age. 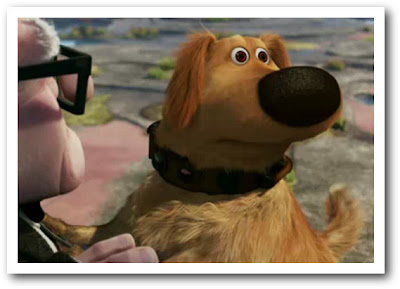 You can read my review of the book The Art of UP, here.
Don’t forget to stop by our site and leave some Disney Geek love!

One thought on “DVD Review: UP”