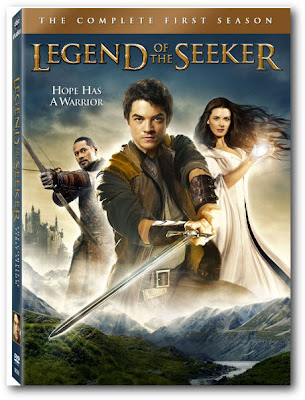 Legend of the Seeker: The Complete First Season

This was a series that completely swept by me undetected last year. A friend recommended that I try it and I had it added to my Netflix queue. When I was given the opportunity to receive a review copy, I jumped on it. I am very glad that I did!
The television show was produced for syndication by ABC Studios and distributed by Disney-ABC Studios. There are some hefty names attached to the series: Sam Raimi (of Spiderman fame) produced and developed the series; Robert Tapert (Xena: Warrior Princess); and Terry Goodkind (author of the Sword of Truth series of books). The series is based on the events in the Sword of Truth book series and like most adaptations, follows the books as closely as possible. Since the show is a one-hour weekly broadcast, the producers followed the overarching storyline and did their best to stay true to the characters created by Terry Goodkind.

In the province known as Westland, a wizard reveals to ordinary woodsman Richard Cypher (played by Craig Horner) the truth: that he is a child of prophecy, the first true Seeker the world has known in a thousand years, destined to wield the powerful Sword of Truth and defeat the evil tyrant Darken Rahlan. A mysterious woman named Kahlan Amnell (played by Bridget Regan), and a wizard named Zeddicus Zu’l Zorander (played by Bruce Spence) join the Seeker on his quest.

The first two episodes feel rather awkward, but by the third one we were drawn into the series and the characters. Some of the events and characters felt rather like a cliche until the world of the Seeker expanded and we met other characters while learning the powers of the Wizard, the Confessor and the Seeker. The characters grow and you truly start to care for them and the relationships they are creating. 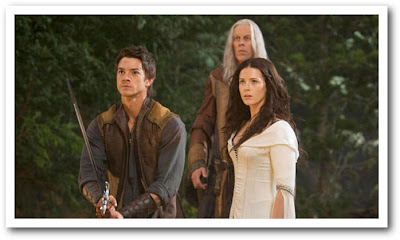 The action scenes during the first half of the season are all played in slow-motion, which helps tone down the gore of fighting with swords. The scenes are intense and would probably be too much for anyone under age ten. I thought the special effects were outstanding for a broadcast television show and added to the story instead of detracting from it. The show was filmed in New Zealand and takes advantage of the beautiful scenery; you never quite get the feeling that it is taking place in our world. I marveled at how the female lead (Kahlan) was able to keep her Confessor’s robes so white–especially during fight scenes and running through the forests. Maybe the wizard had a great dry cleaning spell!
If you are a fan of action/fantasy shows, the Lord of the Rings movies or sci-fi/fantasy novels, then you will love this show. Terry Goodkind fans will be pleased; he has given the show his stamp of approval and is working with the writing team on each episode.
The second seasons starts on November 7! 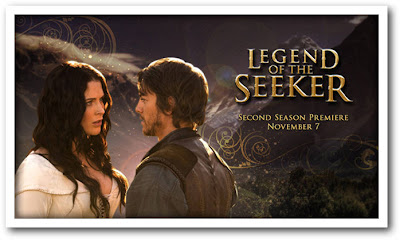 2 thoughts on “DVD Review: The Legend of the Seeker”