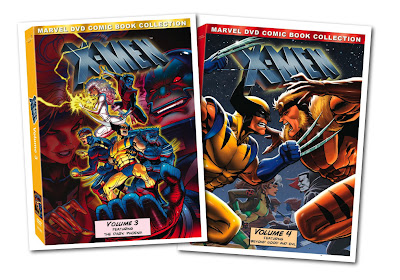 We had a blast watching this 4-disc (combined) set of Marvel cartoons based on original X-men comic book stories. You might be asking why a Disney site is reviewing the X-Men animated series. The set is being released through Walt Disney Studios Home Entertainment and with all of the recent discussions concerning Disney’s four-billion dollar acquisition, it seemed like it would be fun! Good family viewing with my boys who are in the perfect age range for superheroes.

Ideally, these discs are for X-Men fans, comic book fans and superhero fans. If your only exposure to the X-Men has been from the fantastic theatrical releases, then these cartoons will shock you. Wolverine retains his gruff attitude but it is difficult to take him serious when he wears the comic book outfit. The stories are a lot of fun and will provide hours of entertainment.

– The X-Men are back for more nonstop thrills and excitement in Volume 3 of the definitive animated series. Faithfully created from the pages of the original Marvel® comic books, these classic stories are a must-have for any X-Men fan! When the all-powerful Dark Phoenix inhabits the body of Jean Grey, The X-Men go to battle in order to save one of their own. Get into the action with 15 spine-tingling episodes, including the 4-part “Dark Phoenix” saga, in this collectible 2-disc set!

– The action reaches all-new heights in Volume 4 of the landmark X-Men animated series. With adventures adapted directly from the original Marvel® comic books, this collection is a rich piece of the X-Men legacy and a must-have for every X-Men fan.

The X-Men must join forces with the heroes of the future when Apocalypse, a mighty mutant, is driven completely mad by his powers! Discover the stunning conclusion to the 4-part epic “Beyond Good And Evil” in this sensational 14-episode set.