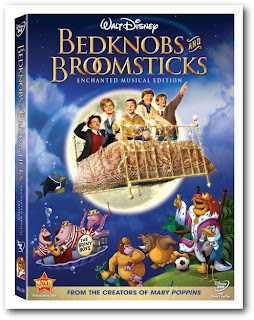 Bedknobs and Broomsticks is a fun, family movie that will charm you with its innocence.

When young Charlie, Carrie and Paul move to a small village during World War II, they discover their host, Miss Price (Angela Lansbury), is an apprentice witch! Although her early attempts at magic create hilarious results, she successfully casts a traveling spell on an ordinary bedknob, and they fly to the fantastic, animated Isle of Naboombu to find a powerful spell that will save England! All-new fun is brewing in this Enchanted Musical Edition, including “The Wizards of Special Effects” feature. Also starring David Tomlinson (MARY POPPINS) and Roddy McDowall, BEDKNOBS AND BROOMSTICKS is a heartwarming adventure viewers will love to revisit!

Eglantine Price is a hapless witch in training that finds herself the ward of three children that have been evacuated from London during the bombing raids of World War II. The children learn of Miss Price’s secret and join her as they try to track down the Substitutiary Locomotion spell, which could help England in the War.

Their travels (on the enchanted bed) take them to London, the bottom of the Briny Sea and to the Isle of Naboombu. Most people remember the film for the animated scenes of the Briny Sea and Naboombu which were directed by Ward Kimball, one of Disney’s Nine Old Men. The animated sections were two of the more charming pieces of the film; we laughed through most of the soccer match.
The Sherman Brothers wrote the songs for the film, which include The Age of Not Believing, Portobello Road and The Beautiful Briny. Out of all of the DVD extras that are included, Music Magic: The Sherman Brothers, is the one worth the money. Host Angela Lansbury traces the history of the development of the songs and there is a rare look at a song never before heard.
Overall, this is a film created by the team that brought us Mary Poppins sans Walt. Like Pete’s Dragon, it has very memorable characters and scenes–the music stands out more in Bedknobs than Pete’s Dragon, but both films offer quality, family entertainment.
Treguna, Mekoides, Trecorum Satis Dee! 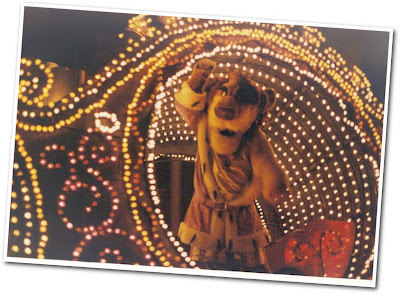 King Leonidas on the Calliope Float from the Main Street Electrical Parade in 1985. I believe that he does have his soccer shorts underneath his robe!
Don’t forget to stop by our site and leave some Disney Geek love!

One thought on “DVD Review: Bedknobs and Broomsticks”