This is a 1994 Magic Kingdom Club 5 Day World Hopper. This pass allowed you admission and unlimited use of the attractions in the Magic Kingdom, Epcot Center and the Disney-MGM Studios. Free use of the transportation was included, as well. With the World Hopper, you were entitled to admission and unlimited enjoyment of Pleasure Island, River Country, Typhoon Lagoon and Discovery Island for seven consecutive days after the first use. Of course, you needed to be a Magic Kingdom Club member to purchase this ticket. 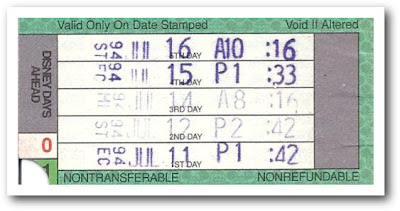 An interesting point to the older World Hoppers was that it recorded your first park visit of the day. This family visited from July 11, 1994 to July 16, 1994. They visited Epcot, Disney-MGM, Magic Kingdom, Epcot and Disney-MGM on the consecutive days of their vacation. Sort of like a 1994 twitter post about your vacation. Notice the Magic Kingdom Club price: $170.51. That is less than $35.00 a day!

3 thoughts on “Warning: Resale of this Ticket is a Crime!”