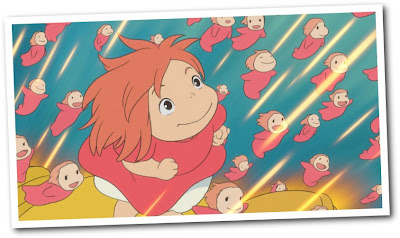 The moment that I finished Spirited Away on DVD in 2003, I was a fan of Hayao Miyazaki. We collected everything we could find on DVD and we were quickly engrossed in My Neighbor Totoro, Howl’s Moving Castle, The Cat Returns and Castle in the Sky.

Howl’s Moving Castle was the last major release and it wasn’t playing anywhere in North Carolina. We decided that we were going to take a family road trip to get to the closest theater for Ponyo. Fortunately, it was playing very close to home.
Seeing a Studio Ghibli film on the big screen is the way to go. Ponyo is a gorgeous, hand-drawn animated film. Set in two different worlds with different styling, you quickly become engrossed in the characters, settings and story. The world above the sea is illustrated in lush water-colors that are awash in light and warmth. The scenes below the sea have their own warmth that is created through the sea life and the wonder they purvey.
This film is being compared to Totoro and I agree that it shares some of the same themes. Miyazaki seems to thrive in an environment where he speaks about nature, the family and humanity. He is a rare artist that understands how beautiful the world can and should be.
I was speaking to a friend about the film and she thought the film was amazing. Her complaint concerned the presentation of the trailers. As expected, they were all future CGI and animated releases. The trailers all paled in comparison to the main feature; Ponyo has a sophistication and beauty that is rarely delivered by modern animation studios. Her thoughts on the Princess and The Frog trailer were dismal–it looks like Disney is presenting a film with crude characterizations that rely on slapstick and by appealing to the lowest common denominator. Her point, and one that I share, is that Disney needs to make a film like Ponyo. It is hard to fathom that Miyazaki can create a work that enchants all ages without a major villain. You have to experience Ponyo to understand.
I urge you to spend the time (and money) to see Ponyo on the big screen. There isn’t much I can say about the film without spoiling it–just go and see it!
And don’t forget to check out the other Studio Ghibli masterpieces!
Don’t forget to stop by our site and leave some Disney Geek love!