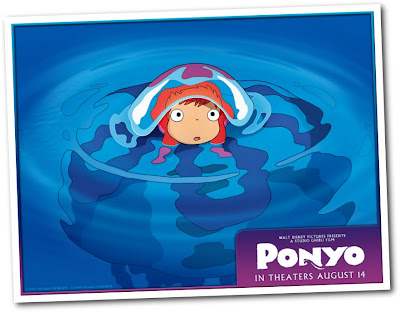 Hat tip to the Ghibli Blog for sharing the links for theaters that are showing Ponyo. It is in a limited theatrical release–make sure to check your area.

Hayao Miyazaki is an amazing filmmaker. His films have innate charm, beauty and sophistication. Spirited Away

, released in 2001, is considered his best work and is a great introduction to the Miyazaki films. I always urge a second viewing of Spirited Away to catch all of the nuances in the story and animation. I have friends that cannot stand animated films and they have raved about Spirited Away.
His films are less whimsical than traditional anime and often focus on themes of good versus evil. Strong female characters dominate most of the Studio Ghibli films. Any time you watch a Studio Ghibli release on DVD, John Lasseter introduces the film and he lets you know how excited he is that you are watching the film. Lasseter has professed on many occasions that Miyazaki is one of his heroes.
My other favorites include: Castle in the Sky

. Another favorite–and my kid’s all-time favorite–is My Neighbor Totoro

.
We have never been disappointed with a Miyazaki film and I could never recommend them enough.
Don’t forget to stop by our site and leave some Disney Geek love!