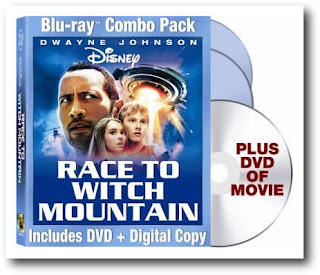 (Blu-Ray/DVD/Digital Download) 2009. (My review copy of the film contains the Blu-ray, DVD and digital download versions of the movie. We do not own a Blu-Ray player, yet, so this review is of the DVD copy.)

We missed this movie during its theatrical run and I wish that we had seen it on the large screen!
This movie is a perfect action-adventure movie for the entire family. A summertime popcorn film at its best. Explosions, excitement, humor and a little suspense all rolled together to keep you glued to the screen until the final moments. The story unfolds quickly and you do gain empathy for the lead characters. AnnaSophia Robb and Alexander Ludwig play the teenage extra-terrestrials that are being hunted by a secret government agency. AnnaSophia (Charlie and the Chocolate Factory, The Bridge to Terabithia and Because of Winn-Dixie) plays Sara and Alex (Air Bud: World Pup and The Seeker) is Seth–normal-looking teens with preternatural abilities.. Both teens play their parts exceptionally well. They pull you into the story the same way that Dwayne’s character is pulled in. 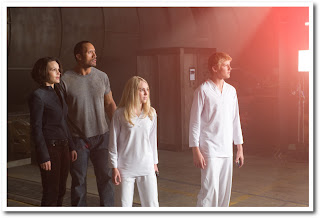 Did you get starstruck when you met him for the first time?
Alexander: It was certainly a little nerve-wracking.
AnnaSophia: Especially because Dwayne is huge! The first time I met him was on the day I flew into LA to work on the movie. We did a tour of Disneyland and there were crowds of people coming up to him, but he was so respectful. He acknowledged everybody and he was really gracious.

Did you go on the Disneyland rides with Dwayne?
Alexander: This was the funny thing… Dwayne wouldn’t get on any of the rides! He can tackle a 7-foot guy jumping on him in a wrestling ring, but he won’t go on a ride for 6-year-olds. It was really funny!

Are you saying Dwayne ‘The Rock’ Johnson is a big wuss?
Alexander: He’s a huge wuss! Oh, wait a minute… No. He’s going to kill me for saying that. It was very funny, though. He didn’t want to go near the rides!

As a caveat, there are explosions, car chases and some serious fisticuffs; Dwayne Johnson plays a very likable character and you understand that he is doing his best to protect the children that fate has thrust into his custody. Carla Gugino plays a discredited university professor that believes we can prove the existence of alien life. She crosses paths with Dwayne and becomes integral to the survival of the extra-terrestrials. There are many cameos and special appearances throughout the film. Make sure to check out the bonus features to find all of them!
Overall, this is a fun movie that the whole family can enjoy together. My boys loved it and have asked to watch it again. Schedule it for your next movie night!
The Blu-ray/DVD/digital download combo is a new product for me. I have purchased the DVD/digital download copy before and we loaded the digital copy onto our laptop for the kids to watch while traveling. With the addition of the Blu-ray, I can see the advantage of purchasing the combo-pack. Not only do we have a hi-def version for the home theater, but we also own a DVD copy that the kids can watch in the car or in their rooms. To me, it is one of the better solutions to the format question.

BONUS FEATURES FOR RACE TO WITCH MOUNTAIN
Both the Blu-ray™ Hi-Def and two-disc DVD editions of Race to Witch Mountain include these exciting bonus features: