I have always appreciated the art of Mary Blair: the mural in the Grand Canyon Concourse of the Contemporary, the artwork for Disney animation of the 1940’s and early 1950’s, the former mural in Tomorrowland at Disneyland and the iconic It’s a Small World. 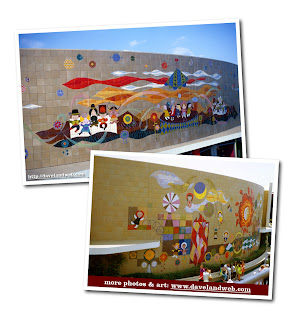 While her art has never followed traditional Disney style, I have always wondered at the stories of Walt Disney’s infatuation with her artwork. Was it the colors, the styles, or the children that were a focus? Did she share Walt’s unbridled optimism?

Blair showed him color and forms that constantly surprised and delighted him. They shared many sensibilities, including a childlike fondness for playfulness in imagery, alongside a seriousness of purpose even with playful things. Both were unafraid of hard work, and Disney appreciated Blair’s diligence in turning out many variations on a subject in order to give him choices. She was a prolific but inspired painting machine. —The Art and Flair of Mary Blair

Walt was always looking for the next innovation that could plus and improve his art, whether it was animation, live-action, television or theme park. Mary Blair happened to be a major influence during the production of the South American films (Saludos Amigos and The Three Caballeros) and other animation of that era. When Walt asked her to return in 1963 to lead the design and color styling of the Pepsi/UNICEF attraction at the 1964 New York World’s Fair, she was delighted. The entire team cranked out the attraction in less than nine months.
Her distinctive style can be seen and felt throughout the Disney Parks and animated films.
You can find a rare and close-up image of the Grand Canyon Concourse mural here.
Thanks to Daveland for providing the images of the Blair mural.
Don’t forget to stop by our site and leave some Disney Geek love!

One thought on “Why Mary Blair?”