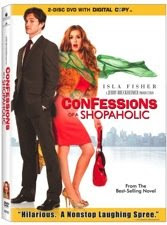 Not the usual fare that you see reviewed at Imaginerding, is it? Make sure you check out the contest at the end of the review–you could win a copy of the DVD!

I had the opportunity to preview the DVD and thought that it might be fun for an at-home date night. We got the popcorn ready and set the kids up in the playroom with the Wii and a new cartoon.
I was familiar with the title; it is based on a book by Sophie Kinsella. Sophie is known in the library world as the author of the Shopaholic series and as one of the pre-eminent authors in the chick lit genre. I assumed, based on the marketing and the title, that it was going to a romantic-comedy.
And plus, Isla Fisher is cute!

When fashionista Rebecca Bloomwood’s out-of-control spending reaches the outer limits of her credit cards, she is forced to find employment to pay for her label-icious wardrobe. Her dream job is a position at New York’s top fashion rag Alette, but she has to settle for a desk at Successful Saving, a struggling financial magazine owned by the same publishing company. With a dogged debt collector (Robert Stanton) hot on her stilettos, Becky becomes the unlikely author of a column on saving money—with a little help from her friends at Google. Her unconventional outlook on money matters attracts the approval of her dreamy boss, Luke Brandon (Hugh Dancy), and Becky begins to think maybe there is a whole new world waiting for her just a few steps away from Madison Avenue.

I was surprised by the amount of laughs–especially uncontrolled laughing–we had during the film. It started a little slow, but quickly gained momentum as the story and characters were set. During the tough economic time, I think most of us can relate to Isla’s character. She has big dreams and is trying to make them come true. She keeps getting distracted, though, by sales and one-of-a-kind deals. You can’t help but root for her and her dreams!

The cast is full of big name actors with small, pivotal, quirky and charming roles. John Goodman and Joan Cusack play comical and doting parents to Isla’s character. Throughout the film, they try their best to help their daughter. Kristin Ritter is her BFF (am I even allowed to say that?) and is Isla’s rock during the film. She helps ground the character and continually tries to turn her in the right direction. 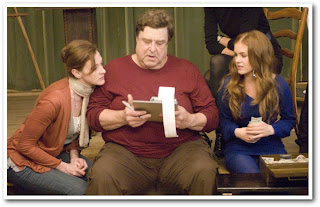 Joan Cusack, John Goodman and Isla Fisher.
My favorite part, by far is Edgar West played by one of my favorite actors, John Lithgow. John’s character is the head of a vast magazine empire…

He describes the character: “Edgar West is the head of the publishing company, he would be someone like the CEO of a company such as Condé Nast, the head of the entire magazine empire, in charge of many different magazines. He is not a fashionista at all, he is at the very pinnacle of the magazine publishing world and he is extremely powerful. As I figured out his character, I see him as a man with a twinkle in his eye. He sees and absorbs everything and he is involved in the big reversal, the surprise at the end, that is all him – he is the one who surprises Hugh Dancy’s character. He likes keeping things secret.”

I enjoyed the film and wouldn’t hesitate to recommend it to family and friends. Isla’s character is wide-eyed, innocent and charming. She is surrounded by family and friends (and a few enemies) and you enjoy the story.

Don’t forget to pay attention to the credits–you see where Isla’s character gets her amazing dancing skills!