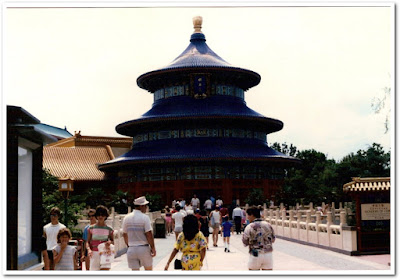 We have another shot from our 1985 Way Back series. It looks like we are in time to catch a showing of Wonders of China.

As important to the Chinese as nature and serenity is their Hall of Prayer for Good Harvests, which stands majestically as the focal point of the showcase. Through this lovely, three-tiered temple we enter a theater where the Circle-Vision 360 film “Wonders of China: Land of Beauty, Land of Time” is shown. It is narrated by Li Bai, an ancient poet who guides the audience through China’s history, culture and breathtaking scenery. In just twenty minutes, we experience the Great Wall, the Forbidden City, Mongolia, the Summer Palace and the Yangtze River, to name only a few sights. Unlocking the beauties and mysteries of China to create awe-inspiring film was not an easy task. Some areas of China were so difficult to reach that equipment had to be brought in on camelback. At one location, a 300-pound camera had to be hand-carried up 16,700 steps.
Walt Disney World, 20 Magical Years, pp 111-112. 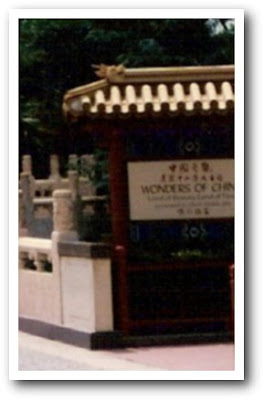 You can read my review of Walt Disney World, 20 Magical Years here.