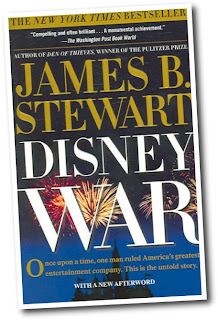 Andy published this review on August 7, 2007. I recently finished the book and realized that I could not say it any better than Andy did over a year ago. My contribution is the Bottom Line.

There has been so much talk lately about the rekindled flame between Disney and Pixar with some even referring to Lasseter as ‘Uncle Lasseter’. I am a true Lasseter believer but have so much caution for coronating him after reading Disney War, by James B Stewart. The references to Eisner being the second coming of Walt early in his tenure at Disney are prevalent in the media at the time. Certainly the buzz on the internet recently has often fallen in the vein ofJohn the Saviour. This book serves as the grandest of cautionary tales, carefully laying out the history of failure at its most visible levels.

Those who know me well know I have been obsessed with this book recently. At over 590 pages, it felt like a relationship. Admittedly, one of my longer relationships.

In the past few months I have read five or six books about Disney, ranging from biographies to field guides, and none of them has captivated me like this book. James Stewart displays an amazing ability to make the non-fiction seems like fiction. Chapters flushed with facts and details are steadily crafted in a digestible and organized manner, sometimes a problem for non-fiction works. Most of all though, the sheer volume of insider information that you feel privileged to read is overwhelming. In the end, the book serves as a scathing indictment of Michael Eisner. Stewart completely reveals the arc of Eisner, painting him early as the genius that saved Disney, and then as any tragic Shakespearean character, as one who lets power intoxicate judgment. The following passage illustrates some of how deep this feeling of coronation ran in Eisner as Stewart recalls a conversation he had with him in his final years as CEO and Chairman:

After some more conversation, and just before we leave for dinner, Eisner gets a pen and a piece of paper. “Disney is a French name, not Irish,” he reminds me. “Now look at this.” He writes “D’Isner,” “Deez-nay,” as the French would pronounce it, “is Eisner without the D.”

Uh, Mr Eisner, Walt is tired of turning over in his grave. Would you please refill your prescription for crazy pills and stop playing Boggle with the alphabet to tie yourself to the Disney family? Thank you….Oh yeah, back to the book. 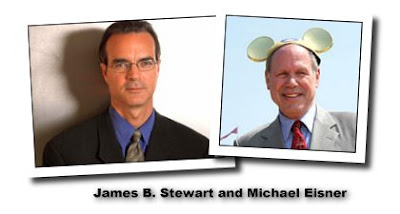 The book is divided into three sections: The Wonderful World of Disney, The Disenchanted Kingdom, and Disney War. No explanation needed to reveal the general tone of each section. This is the simplest way to describe the arc of Eisner’s career. As a testament to Stewart, I felt each section was more addictive than the previous. The deep, detailed accounts of his relationships with Katzenberg and Ovitz dominate the landscape and present him as neurotic and uncontrollable.

What made the deepest impact was the pointed way in which Stewart revealed the flaws of Eisner as he became more entrenched in defending himself. Earlier Daily Figments have pointed to some of the brilliant things he did, such as saving the Imagineers from the chopping block. (Ed. note- Splash Mountain is the Thriller of attractions) The following passage does the opposite, truly showing how Eisner failed to consider any threat to his throne:

In the course of renegotiating the Disney relationship with Pixar, Roth presented Eisner with a proposal that would both solve the issue of succession (Ed note- Eisner would not name a President to succeed Wells and therefore, no successor to himself.) and address the faltering performance of the animation division. It was admittedly bold: Disney should buy Pixar (as it could have done years earlier) and merge its own animation division into it. “Make it all digital,” Roth urged. “That’s the future.” As part of the deal, Eisner should make Steve Jobs, Pixar’s chairman, president of Disney. “Jobs is a darling of Wall Street,” Roth argued, “And you’d get John Lasseter, the greatest creative mind to ever come out of Disney.”

At any time in the buildup to Eisner’s ousting, any person could see the merit in this idea. Eisner could have written himself another ten year contract based on this move alone. But as all tragic characters falter, so goes the phrase, “L’etat, c’est moi”.

I have heard other Geeks say they have hesitated on reading this as they are uncomfortable with the Disney dirt. Please, read away as this book only made me understand the depths of stewardship we have in protecting Disney. As brother Roy campaigned for “Save Disney” to out Eisner, he was exercising his ability to shepherd Disney back into the greener pastures of creative content that had become barren under Eisner in his later years. I know you will enjoy this read, although you may be sad when it ends its relationship with you. After 590 pages, this is how you treat me???? Another relationship ended.

Bottom Line: This book should be required reading for anyone interested in deciphering the Eisner years at the Walt Disney Company. I never had the feeling that Stewart had an agenda, per se, but that he was amazed at what happened within the board room at Disney. It does read like a corporate thriller with very familiar characters throughout. Some of the decisions that Stewart discusses boggle the mind–you wonder what was Eisner thinking? This is a title that most public libraries will have on their shelves.

4 thoughts on “Book Review: The Disney War by James B. Stewart”