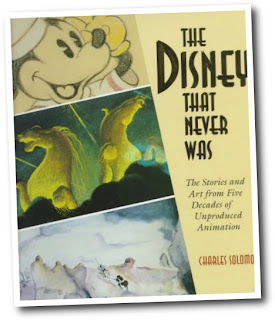 The Disney That Never Was: The Stories and Art of Five Decades of Unproduced Animation

Charles Solomon is a well-known name in animation history and criticism circles. H e has authored articles for Rolling Stone, Newsweek, the Los Angeles Times, National Public Radio, the New York Times and many other publications. He is also the author of two other well-known Disney and animation-related titles: Disney Lost and Found: Exploring the Hidden Artwork from Never-Produced Animation

and Enchanted Drawings: The History of Animation

The Disney That Never Was takes us into the Animation Archives to see and read about unproduced shorts and feature films. Solomon has collected sketches, storyboards, concept art and the stories behind the artwork. As stated in the title, we follow the history of unproduced films throughout the studio’s long and storied past. Solomon divides the book by genre as opposed to strict chronological order. The groupings are logical when looking at the artwork: Mickey, Donald and Goofy; fairy tales; wartime films; Fantasia and its successors; and miscellaneous films. 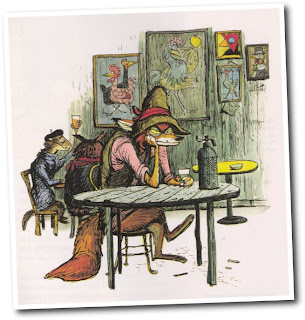 Reynard from Chanticleer by Marc Davis

I enjoyed this book and found it wistful and exciting. Solomon explains that the unproduced animation and artwork could have been shelved for any number of reasons: perhaps the story wasn’t strong enough; there weren’t enough artists to complete the pictures; the characters might not have had the appeal; or it never made it past an initial meeting. The Disney Studio has always well-documented their meetings and has preserved almost all stages of artwork from the animated films. In particular, the Disney artists have always found it inspirational–and helpful–to study the original animation from Snow White and other classic films. When you read this title, you can only imagine how different the animation landscape might look if some of these films had been produced. Some cases make you wonder why the animation was halted. 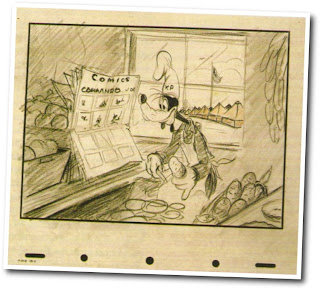 Goofy from How to Be a Commando, artist unknown.

The Disney That Never Was is a reference tool that you will enjoy studying and reading for many years to come. Solomon is able to provide a fantastic look at how the animation process works and how the studio functioned during the animation heyday of the 1930’s and 1940’s. In some instances, ideas were shelved and used much later or were the inspiration for other projects. The sections on Chanticleer, Don Quixote and Hiawatha were eye opening about the process–animation-wise and politically–that the animation takes on its circuitous path to the big screen or as it is derailed. 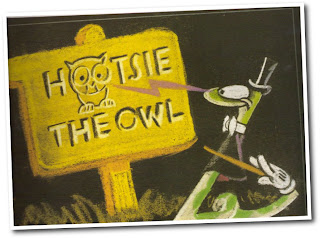 Bottom Line: If you are a fan of Disney animation, then you need to own this book! Charles Solomon has raided the Animation Archives, interviewed animators and researched the stories to bring us some of the most exciting information about Disney animated films that were never produced. Although we only gain glimpses of some films–almost like a tease–there is not another resource that tells this many stories about the films we never saw or heard about until this book.

2 thoughts on “Book Review: The Disney That Never Was”