Occasionally, we ask one of our good blogging buddies to answer a series of precise and predetermined questions. Andrew and I spent years in a Disney think-tank perfecting the questions presented below. For this Meet Our Neighbor segment, we asked DOC (also known as Greg) from The Disney Obsession. Greg always writes from the heart and it is apparent that he is obsessed with Disney. One of my favorite features of his site is his Where in the World section. He has baffled me quite a few times with his “trick” photography.

What is your earliest Disney memory?

I am old enough to remember Uncle Walt on Disney’s Wonderful World of Color so those have to be my earliest memories of Disney. I remember Tink adding splashes of color over Sleeping Beauty Castle to open each show. 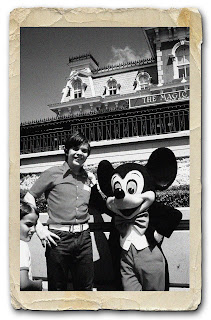 What is your single favorite attraction?

This is one of those questions that I hate to answer because there are so many to choose from and each one is special for its own reasons. But I am somewhat nostalgic. So, I am going to go with Peter Pan’s Flight. My first adventure with Pan was in 1972 and nothing can replace that first flight over the city of London. No trip to Walt Disney World is complete without at least one Flight. In October ’07 a cast member gave me a Magical Moment of five FastPasses. I used them all immediately and on one ride through the ride stopped. My ship was over London. Talk about magic. 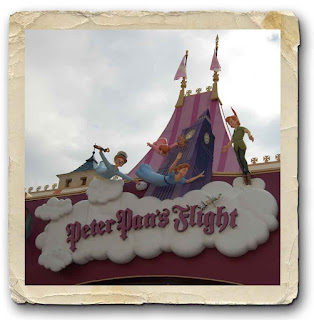 What is your favorite Disney and non-Disney movie?

The Jungle Book is my sentimental favorite! I love the music, especially The Bare Necessities and I Wan’na Be Like You. But most importantly it is because I remember my dad taking me to see it. What is my favorite non-Disney movie? Man, this is a tough one. I am big fan of the Marx Brothers films, Greta Garbo and others of that by-gone era, but I suppose I am going to go with The Music Man starring Robert Preston and Shirley Jones. In the days before VCRs I would stay awake at night to watch this film. Again, it all harkens back to nostalgia and sentimentality for my childhood.

What is your least favorite park?

This will have to be Disney’s Hollywood Studios. I am open to the possibility of this changing. I like the art deco aspects of the park and it has a few rides that I enjoy, but somehow it doesn’t do for me what the other parks do.

What is your favorite park?

As special as the Magic Kingdom is, and most every trip begins with a walk down Main Street U.S.A., my favorite park is Epcot. That is where I renewed my love for Disney as an adult. The icon is like no other. The moment it became “the” park was when I first heard the sub-woofers kick in during Saint-Saëns “Organ” Symphony in Impressions de France. From that moment on…

Who is your favorite Disney character?
Mickey Mouse would be the obvious choice and my office at home is filled with Mickey. But my favorite is Peter Pan. I have done fairly well at eluding growing up. Just ask my family. I have this ongoing war of words with my youngest nephew over who is The Pan. He claims he is. I have been trying over the past year to explain to him that in order to be The Pan one must first have the opportunity to grow and then refuse to. He has not had that opportunity. Pretty pathetic isn’t it?

What is your favorite Disney song?

There are so many great Disney songs to choose from and my iPod is loaded with them. But I have say that “Feed the Birds” would be my favorite. It means so much to me because I suppose it meant so much to Walt. It can, for a moment make me think that I am standing there with Walt in those last months of his life while the Sherman Brothers played and sang it for him. The song is art.

If you could switch places with any historical or living Disney employee, who would it be and why?

There are so many to choose from, but instead of rushing to some of the more obvious choices, I think I would like to switch places with John Lasseter. He started his career with Disney as skipper on the Jungle Cruise and worked his way through the ranks. He is pioneer in his own right and embodies, I believe, the spirit of Walt. Somehow though, I doubt he wants to switch places with me. It would be fun to hang out with him for a day though. Can you arrange this?

What is your must eat food at WDW?
Really? Again, so many choices. A Dole Whip comes to mind, but honestly, I have to have a couple of Egg Rolls from The Lotus Blossom in the China Pavilion. Not the best in world, but when you’re touring fast and loose, these will hit the spot. And with a healthy helping of Chinese mustard you can also clear your sinuses.

Favorite place to stay at WDW?
This would be the Port Orleans French Quarter. It’s moderately priced, small and intimate. The food court is reasonably good and being the first stop on the Port Orleans bus loop doesn’t hurt either.

What is your favorite place to be at WDW?
There is just something special about walking down Main Street U.S.A. It is like, coming home! I am also particularly fond of walking around and soaking in the atmosphere of the World Showcase. 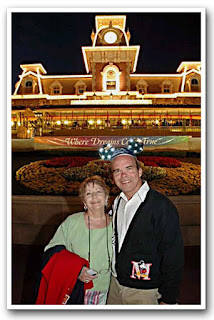 What is your favorite restaurant?
I feel fairly sure that this answer is about to change. But as of this writing it is the Yachtsman Steakhouse. What? No Le Cellier? I haven’t been able to get in there over the past few years.

What is the first thing you want to do on your next trip?
Ride Toy Story Midway Mania! Is it going to be the first thing? No, my flight arrives after all the FastPasses have been distributed for the day. But, that doesn’t change my answer; it is still the first thing I want to do.

What is your favorite fireworks show?
Man! Okay, Illuminations: Reflections of Earth. The music! The music simply takes you to another place for 12 minutes. Where? It’s different for every person. I do have to add that I am a fan of the earlier versions of Illuminations and watch them on video every now and then. 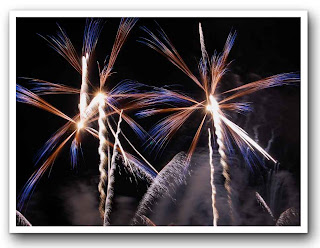 Where did you develop your love of Disney?

It is a simple answer, Main Street U.S.A. and the World Showcase.

If you had to choose parks or movies, which would it be?

Does any forensic evidence exist linking you to the Kennedy assassination?
Those records will be opened in 2038, I believe. I am afraid I can not comment on that subject until then. I did almost miss a connecting flight to London in DFW once.

Would you make any major changes to the current design of any of the parks?

I would consider a more thematic or “land” approach to Disney’s Hollywood Studio. I like the idea of a LucasFilm area, the continued development of Pixar Place, and so forth.

What is the most significant architectural feature of WDW?
In my opinion, the geosphere; Spaceship Earth. Castles abound, and they are spectacular, but there is only one geosphere.

What is the weakest Epcot country?
Italy. While it is architecturally beautiful, there is not much there to entice me to linger. You see it once, you’ve seen it. But, I still walk through it on each trip just in case something catches my eye.

What is your favorite Disney guilty pleasure?
Dole Whip. But I have recently joined a support group. Did you know that Dole Whips can be used as currency, in that you can usually pay for favors by offering a minimum of one Dole Whip.

Where do you spend most of your time online when in the Disney-sphere?

Imaginerding! Did I get that right? Oh, and I also frequent the Main Street Gazette, Passamaquoddy, the collective Those Darn Cats sites, Lou’s endeavors, 2719, and a handful of others. Oh, and there is this little thing called The Disney Obsession that I am fond of. If you want news, reviews and other timely items visit the former. For Disney and life, visit TDO.

You are the CEO and you have to cut one division: film, animation, parks, music, ABC, or ESPN. Where do you start cutting?

Bye-bye ABC. I don’t watch television as a general rule, but I can’t survive without the others. Yeah I know, ESPN is television. Well, I am Tennessee Titans season ticket holder so I have a passing interest in football. Sometimes ESPN can be useful.

Do you have any money we can borrow or have?

Yep. Did I mention that Dole Whips can be used as currency? 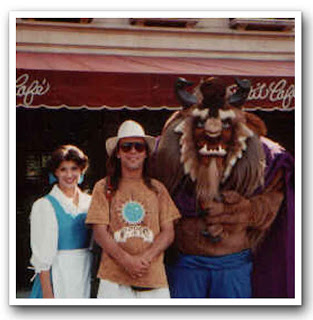 What do you consider the most historically significant or defining moment in Disney history?

For me it is the loss of the rights to Oswald the Lucky Rabbit which necessitated the creation of Mickey Mouse. As Uncle Walt said, “I only hope that we never lose sight of one thing – that it was all started by a mouse.” Everything that we have come to know and love stems from the creation of a mouse.

How do you feel about Disney’s stance to remove Song of the South and other period specific pieces from its association?
I disagree. While it may be considered culturally insensitive in our time, it was relevant to the period it portrayed; as were many other films. But it is an honored film in the Disney canon and should remain part of that canon.

If you could change one thing about a Disney Movie, what movie would it be and what would you change?
While I enjoyed the film, National Treasure 2: Book of Secrets would have been a better sequel. For me personally, the first film sparked a renewed sense of history and a desire to revisit our history. The second film didn’t do that for me. To go back and read about the signers of the Declaration of Independence and read our historical documents interest me. Finding Cibola does not. I know, it is not much of an answer, but then, I am not a film critic.

Which Disney Hotel could you live in for the rest of your life?
Easy, The Grand Floridian! It is dream of mine to stay one week, heck, one night in the Walter Elias Disney Suite there. So if anyone from Disney is reading this, you may consider that a HINT.
What is your favorite Disney book?
Thanks to George, my Disney library has expanded considerably in the last year. All in all, I would say Walt Disney Imagineering

by the Imagineers is my favorite, but is followed very closely by Designing Disney

Thanks for taking the time to answer our questions, Greg! Don’t forget to stop by The Disney Obsession and leave him some Disney Geek love!

4 thoughts on “Meet Our Neighbor: Greg (aka DOC) from The Disney Obsession”