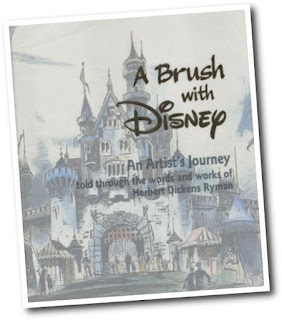 A Brush with Disney : An Artist’s Journey, Told through the words and works of Herbert Dickens Ryman 252 pages, 2000.This is an amazing and difficult book to review; not for any reason you would expect. The text is compelling and you learn about the man and the artist. The reproductions of Ryman’s art is outstanding. You understand the gift the man possessed. What makes the book so difficult to review is also what makes it so amazing–there is no eloquent way for me to describe the artwork found in this book. You have to see it to enjoy the amazing pieces of art.The book was put together by Bruce Gordon, David Mumford and the Ryman-Carroll Foundation. Bruce and David also did The Nickel Tour and Walt’s Time. Bruce co-edited The Art of Disneyland and Disneyland: Now, Then and Forever. This work is a love letter from Mr. Ryman’s closest friends, co-workers and family to the legendary artist.

There are four major sections of the book: Odysseys (journeys he took throughout his life), Hollywood (working for major studios), Fantasy Lands & Disney Worlds (Disneyland through Disneyland Paris) and Legacy (The Ryman Foundation). Most Disney enthusiasts will undoubtedly focus on the concept artwork for the theme parks. It is very impressive to see the artwork in one place and realize how much Mr. Ryman was responsible for developing the overall feel for the lands and attractions.

Each land in Disneyland is covered (except Mickey’s Toontown) and we see the progressions that Mr. Ryman makes in his own artwork for the company. The early work for Disneyland is a little more focused on specific areas whereas the latter works seem to be more sweeping and carry more emotional weight.

The other section of the book refer to Mr. Ryman’s non-Disney career. He spent a few years travelling Europe and Asia before doing studio work and he even spent a few years painting portraits of the performers and clowns for the Ringling Brother’s Circus. After his Disneyland and early Magic Kingdom work, he travelled through Europe and Asia again. He never really left Disney; they called him back to work on concepts for Epcot, Tokyo Disneyland and Disneyland (The Indiana Jones Adventure).

Let’s let the art speak for itself:

There is so much more fantastic art throughout the whole book. The few pieces I have shared are just a few of the Disney-related works. So much of his life’s work is more about emotions and feelings than realistic portrayal. In the book, his most powerful statements are from the time he spent painting the Pacific Coast near his home. He effectively captured the mood and feel of the rocky shores. I have read a few criticisms about the book–namely that there is too much sub par art and not enough Disney-focused art. Personally, I was fascinated with all of Mr. Ryman’s art. Not only did it tell of his life, but it shed some light on the influences that were present in his work. Whether it was mood, shadows or vistas; you could immediately sense that you were viewing an artist that was meant to do his work.
Bottom Line: I thoroughly enjoyed this dedication to Herb Ryman. This book isn’t for every Disney Geek, but those enthusiasts with an interest in concept art and a look at the development of a Disney artist will treasure it. The artwork is astounding and there were some surprises within the pages. As is, the book is out of print and you should expect to pay street prices well above the release price. Although it isn’t as spectacular as The Nickel Tour or as comprehensive as The Art of Disneyland, you do see where Mr. Ryman excelled and where his influence was most prominent. If you can snag a copy of it, you will not be disappointed.
Don’t forget to stop by our site and leave some Disney Geek love!

3 thoughts on “Book Review: A Brush With Disney (Herb Ryman)”