I stumbled across this letter from Walt Disney to Irene Gentry of the Kansas City Public Library. I would assume that it is a small testimonial for the American Library Association, which held its annual conference in New York that year. What is notable is the book that Walt mentions. 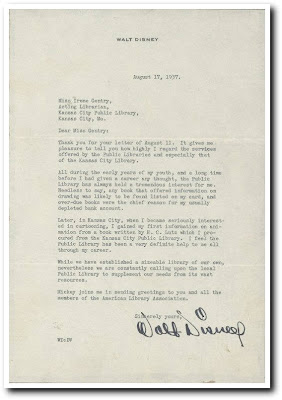 Thank you for your letter of August 11. It gives me pleasure to tell you how highly I regard the services offered by the Public Libraries and especially that of the Kansas City Library.

All during the early years of my youth, and a long time before I had given a career any thought, the Public Library has always held a tremendous interest for me. Needless to say, any book that offered information on drawing was likely to be found listed on my card, and over-due books were the chief reason for my usually depleted bank account.

Later, in Kansas City, when I became seriously interested in cartooning, I gained my first information on animation from a book written by H. C. Lutz

[sic] which I procured from the Kansas City Public Library. I feel the Public Library has been a very definite help to me all through my career.

While we have established a sizeable library of our own, nevertheless we are constantly calling upon the local Public Library to supplement our needs from its vast resources.

Mickey joins me in sending greetings to you and all the members of the American Library Association.

In Michael Barrier’s excellent biography, The Animated Man: A Life of Walt Disney

, we learn about the book in question. Barrier is able to provide more details about the beginnings of Walt’s experience with animation and learning new techniques. 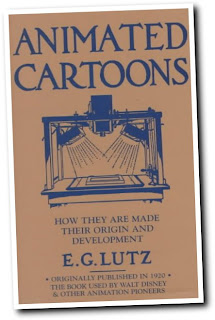 Animation itself could not have been new to Disney. Animated cartoon–short films made with drawings, rather than cutout figures–had been common place on theater programs since 1915 or so. Those cartoons, made by New York studios, were at a peak of popularity–or at least visibility–in early 1920, to the point that Paramount, the largest distributor, felt obliged to launch a weekly cartoon package of its own after losing the cartoons made by John R. Bray’s studio to a rival. It was not until he went to work for Kansas City Film Ad, though, that Disney saw how such films were made.

Disney was intrigued by animation’s possibilities and by what he called “the mechanics of the whole thing.” He was essentially self-taught as an animator; he wrote to an admirer many years later, “I gained my first information on animation from a book … which I procured from the Kansas City Public Library.”? That book was Animated Cartoons: How They Are Made, Their Origin and Development

by Edwin G. Lutz. According to its copyright page, Lutz’s book was published in New York in February 1920, the same month Disney joined Kansas City Film Ad, so he must have read it very soon after it was added to the library’s collection. He said of the book in 1956: “Now, it was not very profound; it was just something the guy had put together to make a buck. But, still, there are ideas in there.”

As elementary as the Lutz book was, it still offered a vision of a kind of animation far more advanced than the Film Ad cutouts. Lutz wrote at a time when animators commonly worked entirely on paper. They made a series of drawings, each different from the one before, that were traced in ink and photographed in sequence to produce the same illusion of movement that Film Ad achieved by manipulating cutouts under the camera. Lutz advocated the use of celluloid sheets to cut down on the animator’s labor–the parts of a character’s body that were not moving could be traced on a single sheet and placed over the paper drawings of the moving parts. Such an expedient (and Lutz recommended others) would have resonated with Disney, who had been so impressed by commercial art’s shortcuts when he worked for Pesmen-Rubin.

You can read my review of The Animated Man here.

3 thoughts on “Walt and Libraries”