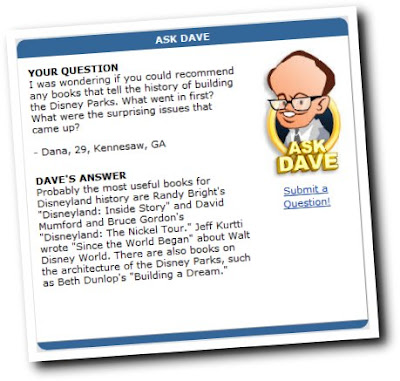 If you get The Disney Insider e-mail, you will notice that each issue has an Ask Dave column. I have written about Dave Smith before. He holds one of my dream jobs.

The question in the August 26, 2008 issue has the following question:

I was wondering if you could recommend any books that tell the history of building the Disney Parks. What went in first? What were the surprising issues that came up? – Dana, 29, Kennesaw, GA

Dave’s Answer
Probably the most useful books for Disneyland history are Randy Bright’s “Disneyland: Inside Story

” and David Mumford and Bruce Gordon’s “Disneyland: The Nickel Tour

” about Walt Disney World. There are also books on the architecture of the Disney Parks, such as Beth Dunlop’s “Building a Dream

The first three books mentioned are in my top 5.

Lou Mongello and I discuss five books that every Disney Geek should own on the WDW Radio Show. Since the World Began is one of books discussed.