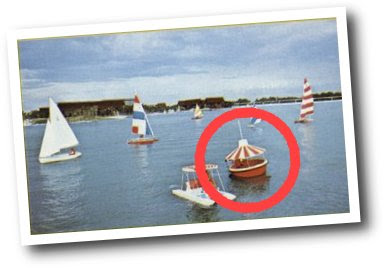 A few weeks ago, Vintage Disneyland Tickets posted a great scan of a 1975 flyer for Walt Disney World. As I was perusing it, I noticed the watercraft scene. I had no idea what the round boat was. It wasn’t in any of my souvenir guides nor could I find it in any of the PR material that I have. I was stumped! Besides, how do you do a Google search for round boat at Walt Disney World and not go insane?

I e-mailed a few of my friends and one of them was able to provide the answer. She told me to visit the pages at Widen Your World and Walt Dated World for the bob-a-round boats.

Alison, at Walt Dated World, had this to say:

Rub a Dub Dub. Three (or four) people in a tub. These bizarre-looking striped boats had what looked like a lightening rod on top of them. (Florida is home to a lot of lightening, you know!). They were only around a short time after Walt Disney World opened. Apparently the boats were often the victim of dead batteries, which prevented them from Bob, Bob, Bobbing Along.
—http://waltdatedworld.bravepages.com/id159.htm

And Mike, at Widen Your World:

Another aspect of the resort [Polynesian] that has seen much change is the range of watercraft made available to guests over the years. Gone are the days when as many as eight people piled into a 40-foot Polynesian War Canoe and took off across the Seven Seas Lagoon toward real islands. And before those craft sailed into the sunset, the circular Bob-A-Round boats (each with an independent stereo system!) had already long since been retired.
—http://www.omniluxe.net/wyw/poly.htm

These four passenger, round boats with striped canopied bobbed around the Seven Seas Lagoon for a very brief period of time after Walt Disney World opened in 1971. —http://www.disneyworldtrivia.com/General-Magic-Kingdom/Bob-A-Round-Boats-Closed.html

All of the sites quoted offer some amazing resources for older and extinct attractions at Walt Disney World. If you ever want to spend some time strollin’ right down the middle of memory lane or need to check a fact, head on over!

Now, does anyone else have any more pictures, information or anecdotes about these long-gone watercraft?