If you’ve been paying attention to my posts, you know that I really like the Kodak Photo Spots located around the parks. My wife found this 1974 Walt Disney World Information Guide (Winter/Spring 1974) on Ebay a while ago. She knows about my love of picture spots and the description mentioned a photo trail. When it arrived, we noticed the middle spread was a GAF Photo Trail map. 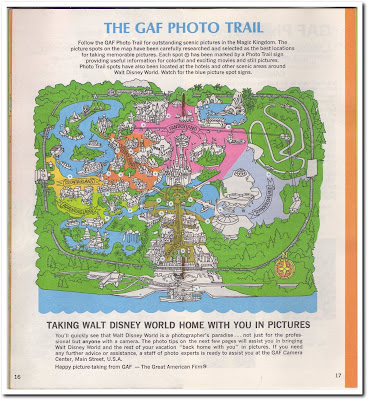 GAF was the Official Film of Walt Disney World (and Disneyland) for most of the 1970’s. Kodak was an original Disneyland sponsor until GAF took over in 1970. Polaroid has also been an official film sponsor, too!

Follow the GAF Photo Trail for outstanding scenic pictures in the Magic Kingdom. The picture spots on the map have been carefully researched and selected as the best locations for taking memorable pictures. Each spot has been marked by a Photo Trail sign providing useful information for colorful and exciting movies and still pictures. Photo Trail spots have been located at the hotels and other scenic areas around Walt Disney World. Watch for the blue picture spot signs.

So, does anyone out there have any pictures of the GAF Photo Trail picture spots?

6 thoughts on “The GAF Picture Trail”