At 2719 Hyperion, Jeff posts Freeze Frames! where he shares hidden details in the various animated films and shorts. The details can be hidden characters, tributes to Disney animators or theme park attractions.

While watching Monsters, Inc. the other day, I caught a glimpse of a few coveted attraction posters from Disneyland. Don’t tell Jeff that I am stealing his idea! 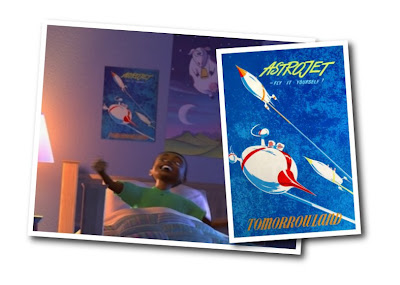 During one of the final scenes of Monsters, Inc.

, you get a glimpse of the Astro-Jets poster hanging above the child’s bed. Of course, this is a pre-1964 poster. This kid must really be into Vintage Disneyland or his parents kept it for him. Or maybe he found it on Ebay! 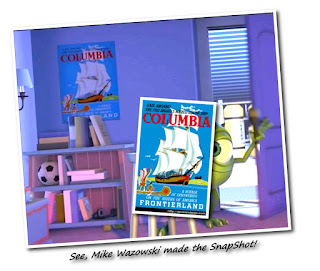 In the second shot, as Mike Wazowski is exiting the child’s room, you can clearly see a poster for the Sailing Ship Columbia at Disneyland hanging above the bookshelf.

As has been stated fairly often, John Lasseter is a big fan of the theme parks and worked as a Jungle Cruise Skipper at Disneyland. It is nice to see Pixar pay tribute to two amazing Disneyland Attraction posters.

To learn more about the Astro-Jets, visit Daveland. He has a lot of vintage Disneyland pictures. Daveland also provided the great image of the Columbia attraction poster.

Don’t forget to stop by Dave’s blog and leave him some Disney Geek love.

Special thanks to Jeff Pepper for providing the inspriation for this post!