This week on the WDW Radio show, Lou and Jeff do a DSI (Disney Scene Investigation) on Spaceship Earth at Epcot. Much like their Horizon and Journey Into Imagination show, Lou and Jeff wax poetic about one of their favorite rides. They cover the four different versions and look at the changes throughout the years.

Back in December 2007 at MouseFest, Andy and I had the opportunity to ride Spaceship Earth in preview mode.

Andy did such a great job with the “essay”, that I wanted to share it with some of our newer readers! It is obvious from the Radio Show, that Lou and Jeff are very passionate about Spaceship Earth. When you read the following, you gain a better understanding of why Spaceship Earth is such a favorite here at Imaginerding. 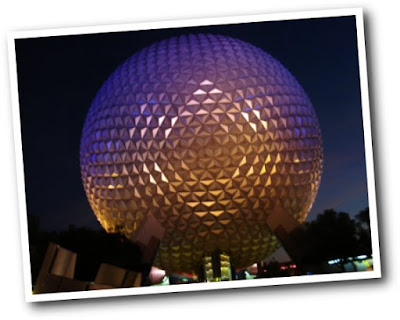 The most formative early image I have of the Disney Parks is of Spaceship Earth (SE) when Epcot Center opened in 1982. Seeing ‘the Epcot ball’ on TV inspired my imagination and watered the seedling that was to become my full grown Disney Geekiness. It comes as no surprise that Spaceship Earth has been a must do attraction over my numerous trips since my first visit in 1996. Of course, Spaceship Earth is currently closed for updates. A new and more modern version of the attraction has been promised. Much to my dismay, the planned soft opening for the lou and improved SE is not until Christmas. I cried a single tear when I realized I would have to do without.

The buzz started when rumors of a sneak preview were circulating around the MouseFesters. Lines starting forming around the wooden barriers surrounding the base of SE and remained all day. The rumors became fact when Jessica from If We Can Dream It told us that they had removed a small section of the barrier and had let people preview the ride for an hour on Thursday night, even though it was not yet finished. A new mission was created: ride the new (and incomplete) Spaceship Earth or I would be forced to nail my feet to the floor in Small World for one year.

George and I hung around SE quite a bit over the next few days and always managed to walk away when the attraction would open. Well, as luck would have it (Luck being our friends Ray and Nancy from Grumpy’s Hollow) on our final night at MouseFest, we were able to swing a double ride on SE 2. Allow me to set the scene…

George and I had given up on riding SE and had decided to meet Lou and Jeff in the Japan pavilion for dinner at Yakitori House. Keep in mind that it doesn’t get much further from SE than this. As I was draining the last drops of a large adult beverage to wash down the huge dinner I had just inhaled, the phone rang. I answered it.

“George, It’s Ray. He says the barriers are down around Spaceship Earth and they are letting people on! They saw it from the monorail. What do you want to do?” 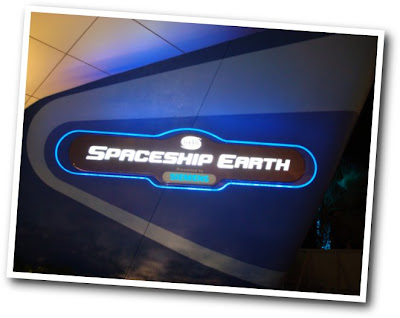 Instinctively, like a Cheetah after prey, George sprang up from his chair and shouted “LET’S RUN!” I gave it a millisecond thought and then followed orders, thinking that if I un-ate on the run to SE, I could blame it on George as a stupid idea to eat and sprint. Unfortunately, the springing from the chair is where the cheetah metaphor dies. Imagine two grown men with recently filled bellies running through the park, hurdling strollers and shedding any remaining dignity they had. Remember the scene from National Lampoon’s Vacation where Chase and Hall race across the parking lot towards the entrance of Wally World? I even think Epcot was piping in Chariot’s of Fire over the park loudspeakers.

From the middle of the U.K. Pavilion, we heard someone shout “George!”. It was Mike Newell from MouseWorld Radio and the WDW Today podcast. We had been talking to him earlier outside the closed gates and he was in the same predicament as us. He had waited days with no success. We slowed down just long enough to see a look on his face that said “WOW!” and he shot us two thumbs up. He knew from our frenetic pace exactly where we were going and the two thumbs up was the proverbial banana and Gatorade you always see marathon runners take from people on the side of the race course. The last half mile was a breeze after the abbreviated but enthusiastic review.

We made it just in time to take five deep breaths, then we were on the ride. A young couple got in the same vehicle as us. We all made jokes about the smell wafting back from the front seat where George and I sat drenched from the mad dash. We all sat in somewhat stunned silence at the improvements WDI made to the story. A more linear story and updated scenes made the ride feel much more complete than version 1.0, even though the new version was only about 85% complete.

When we made it back down to the bottom, Ray called and said they had closed the gates and that was it for the night. The cast member who was assisting guests off of the ride saw by my face that the term “Please exit carefully,” did not apply. 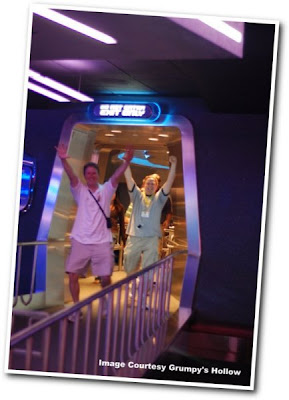 The young couple behind us was quiet and the cast member assumed they were with us, so we all rode again. This time was interesting because the ride was mostly empty and we all talked about the improvements and the weaknesses. Although they were not fellow MouseFesters, it was clear they knew their Disney. We all agreed the new animatronics were a significant improvement and felt the new garage scene was deeply cool. And George finally got his library–it was encouraging to know that instant community spontaneously develops all over the place at Disney.

I won’t bore you with my review of the ride because you know I loved it.

Lou and Jeff, thanks for the weird Japanese treats. I think it gave me some sort of strange ginseng boost that helped me leap that last double stroller.

Ray and Nancy, thanks for the save.

When people talk about their favorite rides and attractions, there is always a sparkle in the eye or a smile in their speech. For me, Spaceship Earth has always been a favorite, but it means so much more to me because of the experience that Andy and I were able to share. And because we such awesome Disney friends that helped make that moment happen!

Learn more about the original attractions at Epcot:

3 thoughts on “The Few, The Proud, The Thankful Redux”