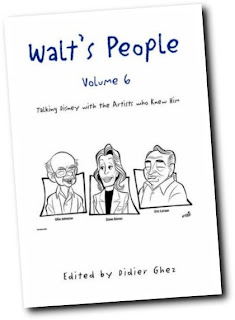 Didier at Disney History has announced that the 6th Volume

of his amazing Walt’s People series

is finally available on Amazon.

I reviewed Volume 1 and I have vols. 2-5 lined up on my shelf. Didier has created such an amazing series with the interviews presented. Animators, directors and Imagineers talk about working with Walt and what it was like to work at the Studios.

Many of the interviewees have passed away and the fact that the interviews were captured for future use is truly wonderful. Researchers will treasure this series for a long time.

Big names indeed. Not only the people being interviewed, but the interviewers are some of the biggest names in animation/Disney research. How many do you recognize?