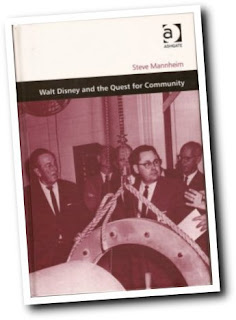 Steve Mannheim has written a wonderful academic treatise on Walt Disney and Walt’s dream for Epcot. The focus of the book is the Epcot City, the development of the ideas and their ultimate fruition. Although the title is treated as an academic work, it can almost be considered a page-turner. Steve has done an impressive job of distilling New Urbanism concepts into a readable and understandable read (for us laymen).

The genesis for the book was when a friend of Mr. Mannheim had described Walt’s plan for another project after Disneyland about a city of tomorrow–where Epcot Center is today. This was the mid-1980’s and there was not a lot of published information at the time. So, Mr. Mannheim began his research. Steven Mannheim holds a doctorate in planning and development. His current professional practices include real estate economics and development.

As I stated in my review of Realityland, there is not a lot published on the history of Walt Disney World. This titles adds greatly to the literature and provides a solid focus on Epcot the City, its history, development and changes.

The work starts with a look at Walt and the germination of the idea. There is a lot of focus on where Walt was, mentally and sociologically, as he began planning the Florida Project (also known as Project X). Mr. Mannheim deftly takes us through the history and theories that Walt was discovering about New Cities, Garden Cities and urban development. With the success of Disneyland, Walt felt vindicated that he could cure the ails of modern society.

With Disneyland, Walt was able to push through the Anaheim City Council to meet a lot of the building demands of Disneyland. With the Florida Project, he knew he would need even more control. The book outlines what Walt, Roy and the leaders of the Disney Company were able to secure and create after Walt’s passing. Mr. Mannheim spent a lot of time interviewing key members of the Company, the State of Florida, local government and Disney cast members. He provides a detailed look at how Disney (the company) figured out what to do after building Phase I of Walt Disney World.

In looking at any historically-based research title, you have to consider the sources cited. Mr. Mannheim devotes 140 pages to the text and the remaining 59 to research notes and the bibliography. To a librarian and Disney Enthusiast, this connotes a vast level of research on Mr. Mannheim’s part. My only issue with the sources cited, is that a lot of the citations are from interviews conducted by the author. As of this review, the interviews have not been published. Talk about a dream publication! Mr. Mannheim, if you are out there, I would love to read the interviews that you have conducted.

I really enjoyed this title. The book is presented as an academic work but it is still an enthralling read and you can’t put it down. Mr. Mannheim easily presents mundane concepts about planning and design and correlates them into the foundations of Disneyland and what we can surmise about Epcot the City. I would love to read the transcripts for all of the interviews that were conducted–there must be a vast goldmine of Walt Disney World-related history on those interviews. After reading this title, you will gain a vast appreciation for Walt’s original ideas and the presentation of Walt Disney World as we know it. This title is geared more towards the serious Walt fanatic and the Epcot junkie. But if you like city planning, the origins of Epcot or theories about what could have happened—you will enjoy this book.

6 thoughts on “Book Review: Walt Disney and the Quest for Community”