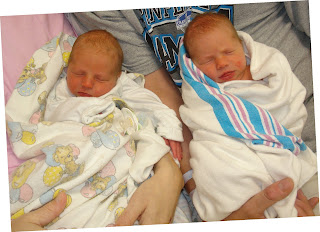 Hello friends, I am back from a long slumber beneath the warmth of two new babies. It has been a while since I have piloted a post at Imaginerding, but that does not mean my heart has not been fully involved in the daily happenings. As some of you may know, my wife and I just welcomed twins, our third and fourth children.
Hold your applause until the credits please….
Left are two reasons my unusually brilliant and disarmingly charming repartee have been absent recently.
Just in time for our one year anniversary, I am checking in to say thanks to all of you who we’ve had the pleasure of meeting over the last year. As George can attest, we have always done this because we love Disney and we want to share that passion with the Disney community. From the beginning we have always talked about making this fun. At times though, life got in the way of fun and we found ourselves struggling to get to the keyboard for our two cents. Even in some of the most difficult times, we still posted, contributing to something that we took pride in being part of. Honestly, it was not pride or fun that brought our weary minds and fingers to the bright screens in dark rooms late each night to dutifully type out the day’s thoughts. It was you.
Look, not to go all Terms of Endearment on you, but the friendships and partnerships that George and I enjoyed with you this year is the thing we actually ended up being most proud of. In honor of you, the Nerdy Boys wish to bestow upon you the highest form of thanks other than cash….. A haiku.
Churro or Dole Whip?
Depends…(no, not the diaper)
Depends on your tastes.
I had to write several hundred (368) haikus until I found the one that represented the Imaginerding credo. There is something for everyone at Disney and we want you to slow down and take notice of the depth that surrounds each guest at the parks. Just so you know, the above haiku beat out a few other compositions I wrote after a few adult beverages last night that did not make the cut. For some reason George couldn’t see the connection between my deeply moving and meaningful poetry and the last year of our blog. Here are a few examples of haikus he left on the cutting room floor:
Imaginerding
Wow! That name takes up the whole
first line by itself.
Cried like a baby
when the bathrooms were all closed.
Thank you Splash Mountain.
We need Eisner back
like the dining plan needs more
stress and confusion.
It is pretty hard to fit such expansive thoughts into such restrictive verse. Thank God I am a genius.
Thanks George. You have given me one of the greatest gifts by sharing your love of Disney with me. Hopefully this cream will clear the post Disney rash up pretty soon. My typing fingers have started to itch again….
Don’t forget to stop by our site and leave some Disney Geek love!

One thought on “Haiku! Gesundheit!”