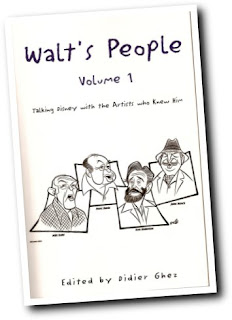 Walt’s People Volume 1: Talking Disney With The Artists Who Knew Him

is five volumes with a sixth one on the way. Didier is the editor of the series and has put together some amazing interviews with Disney artists. In some cases, the interviewer is as well-known as the interviewee!

The compilation of interviews that Didier has collected makes this volume so very important to anyone researching Disney. The interviews are not just with animators, but artists that worked with Walt on Disneyland and went on to work on the Walt Disney World project. The stories, recollections and anecdotes are priceless and proffer a view of Walt that you can only get from talking to the people that worked directly with him.

In the forward, Didier puts forth some important thoughts about the interviews.

…it is important to always keep in mind that no statement from any interview should ever be considered as the absolute truth, as the interviewee might have misremembered the facts, may have seen only part of the project described, or may have his own personal reasons for representing reality in a certain way. Hence the further importance of the various perspectives provided throughout this series.

Didier’s work is going to play an important role in the future of research into the Disney Company. Many of the artists were involved in classic Disney animation at a time when credit wasn’t clearly given or assigned. It is a chance for the artists to speak for themselves and offer an insight into the Disney Company that we will not likely find elsewhere. You might pass up a book like this if you are a theme park junkie, but reading the stories from artists like Hench, Davis, Carlson and Anderson–that worked on Disneyland and Walt Disney World projects–are wonderful.

Bottom Line: It is hard to place a work like Walt’s People in the overall Disney literature–it doesn’t focus solely on animation or the theme parks. The interviews collected are amazing and offer insight into Disney, the Studios and the theme parks. The volumes are not for everyone, but the Disney historian, enthusiast and geek will take a lot away from Dider’s work. It is a great place to get your Geek on and delve into what it was like to know and work with Walt Disney, Roy Disney and the talented people in the organization.

I can’t wait to start the next volume in the series!