At the Hollywood and Vine Restaurant at Disney’s Hollywood Studios, there are famous Hollywood landmarks in the pictures throughout the eatery.

I caught these to “older” maps of the Hollywood area on the side wall next to the wait staff’s soda station. A waitress was kind enough to get the first picture for me. 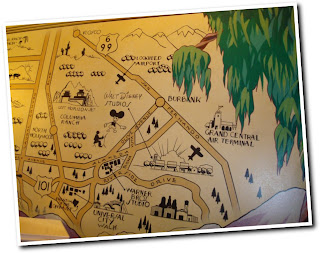 The map above points us to the Walt Disney Studios (and some other studios) in the Burbank area. This references the Burbank Studios the company moved to in 1939 and would seem to place this restaurant in the early 1940’s. A castmember has obviously taken it upon themselves to add to the map. Do you see what was added below Universal City? 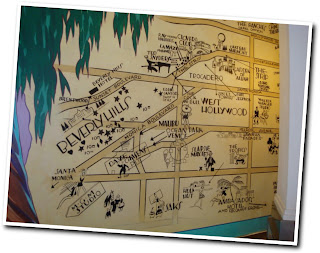 The second map features some of the sites that you might encounter while sightseeing in the Beverly Hills / West Hollywood area.

3 thoughts on “Old Hollywood and Vine”