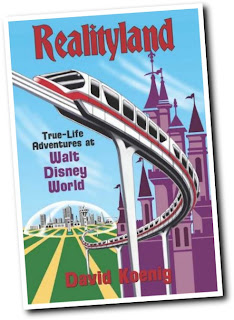 Andrew and I met David at MouseFest 2007 and heard him speak about Realityland at the Reading Trout Book Store in Celebration.

Realityland fills a much needed void in the WDW literature–an unofficial look at the development and construction of Walt Disney World. The book follows the same formula as Koenig’s Mouse Tales titles except a lot of space is devoted to the history and development of Walt Disney World (whereas Mouse Tales focuses mainly on anecdotes about Disneyland instead of the construction). It is obvious that Koenig spent a lot of time talking to cast members, executives and construction people from the early days. The first chapters are filled with anecdotes about the Preview Center, hiring the first cast members and the rigors of developing the property.

This is one of the few un-official resources that effectively documents the construction of the Magic Kingdom, the TTC and the first resorts. Koenig offers an easy to read and compelling look at the overall development of the property. The stars of the book are the individual cast members that Koenig was able to interview. Koenig was fortunate enough to spend time with cast members from all areas of the company. He spoke to former executives that talked about the mishaps and happy accidents, cast members that talked about the early years of working at WDW and with locals about the political machinations that took place.

Koenig presents an intriguing view of how Walt, Roy and Card Walker all dealt with the Florida project. There were a litany of undercover plans, political dealings, union issues and theft! As Koenig moves through the the timeline of the resort, he presents the major issues and milestones that each management needed to contend with, including: the fuel crisis of the 70’s, the question of “Where’s EPCOT” and the expense of EPCOT (leading to Card Walker’s retirement) and the new management of Esiner/Wells. Like Mouse Tales, there were times when I laughed out loud and times when I wondered how they got it all done.

As with Koenig’s other titles, he doesn’t gloss over the negative side of Disney. He does cover the accidents that have happened over the years and one of the final chapters is devoted to Disney Security. I never felt that Koenig was out to get anyone–he was just trying to present a fairly unbiased look at Walt Disney World. One story that stands out is that he dispels the myth of George, the ill-fated worker that is rumored to have died during the construction of Pirates. He uses official records to show when the first actual death happened at WDW (I’ll let you read the book to find out) and covers accidents, missteps and Disney/Reedy Creek policy. As I mentioned in my review of the Mouse Tales books, you might have to remove your rose-colored Mouse Ears while reading Realityland.

I would surmise that the lack of information and focus about the development of the property after the Eisner/Wells team took over is due to the author’s one noticeable bias–he is not a fan of Eisner. Koenig almost vilifies Eisner when talking about the creation of the Disney-MGM Studios. A lot of the more recent developments are glossed over. The dearth of information about the most recent 15 years is the major drawback to the book.

When thinking about the history that Koenig plays out, I was able to place a lot of the people and events that I had read about in other sources–this time with much greater detail. I would hesitate to let this work stand as my only source on Walt Disney World: Since the World Began: Walt Disney World the First 25 Years; Disney: The First 100 Years and the History Channel Modern Marvels – Walt Disney World all help to create a solid history of Walt Disney World.

This is a work that will be used by future generations to help further document the history of Walt Disney World. It is obvious by the Notes section, that Koenig did his research and left a great paper trail. Koenig spent a lot of time interviewing people and researching support documents through newspapers and magazines. It is very well researched.

Withstanding the last sections of the book, the first 200 pages alone are worth the price of the book. You will learn more about the development of the property and what it took to get the Walt Disney World Resort up and running. You will never disembark from the ferry or walk down the ramp from the monorail without thinking about how massive an undertaking Walt Disney World was after you read Realityland.

Bottom Line: For any WDW enthusiast, this is one of the few books to tackle the early history of Walt Disney World. Koenig does a fantastic job of telling the story and keeps you wanting to read more. The only shortcoming is the lack of depth in the sections on the development of the Disney-MGM Studios and the Animal Kingdom. You will walk away a deeper understanding of the Resort and a greater appreciation for everything that has been done. I enjoyed this book and I recommend it to all enthusiasts–no matter what your Disney Geek Level.