One of my favorites scenes in the Disneyland Pirates of the Caribbean is the Crew’s Quarters in the Haunted Grotto. Once you dig a little deeper into the history of the attraction, you’ll see that the Haunted Grotto was not supposed to be what we have today.

Well, I suppose that I was a kind of consultant for taste. Is it good taste? Or bad taste? I had an attention to detail, to what would best tell the story. Because many people get excited about the work and drift off from the story.

Like Pirates of the Caribbean, for instance. When you get in, you see on the door: Pirates of the Caribbean. So you expect to see pirates. Then you get on the boat, so you think: “This is okay. We’re going to see pirates.” The boat goes out and the first scene that you see is the restaurant. So people think: “Hey, these are not pirates. These are people having lunch. What happen to the pirates we are supposed to see?” Then we go down the chutes, and it’s where the pirates were. But they’re all gone. There is nothing but skeletons down here!

Well, it was never supposed to be like that. Walt died before we had finished it. The original idea of Walt was that you came down there, into the caves, and there were no pirates … But they had been there just seconds before! There was a hot meal on the table, steaming. There was no jewelry. Walt wanted this atmosphere: They were supposed to live here, they’ve gone outside somewhere, but they could come back at any minute and catch us …

Then you were supposed to discover the city, where they were. But because somebody liked skeletons and discovered that they were available at a cheap price, we used too many skeletons all over the place, and the public got the wrong message. Now people didn’t know what it was and what was going on …

Mr. Hench is discussing the fact that the grotto was supposed to be presented as is; you were just passing through their home as they began looting, pillaging and doing what pirates do best. Moving on to the Crew’s Quarters, there is a beautiful Marc Davis painting hanging above the bar while the two pirates enjoy their libations. It is a great tie-in to a later scene. It is one of my favorite parts of any Disney attraction. 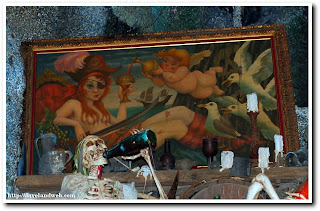 From Jason Surrell’s Pirates of the Caribbean book: 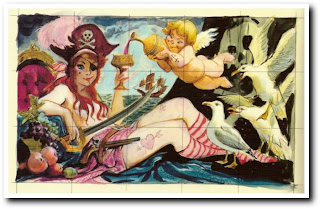 Hanging above the bar is a painting of a lady buccaneer enjoying her own interpretation of the high life. The color of the wench’s hair is no coincidence. In the concept sketch on which the painting is based, Marc Davis portrayed the ever popular “Redhead” from the upcoming Auction scene as she might appear after many years of presumably happy marriage to the pirates. A pirate’s life for her, indeed.

— p. 81, Pirates of the Caribbean: From the Magic Kingdom to the Movies

Thanks to Daveland for letting me borrow his most recent shot of the Redhead painting in the Haunted Grotto. If you’re not a regular visitor to his blog, you are missing a lot of great pictures (and commentary).

We wants the redhead!

10 thoughts on “We Wants the Redhead…”