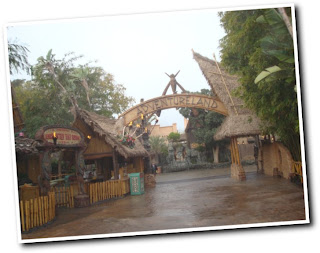 When designing a possible Star Wars attraction in the early 1980’s, the Imagineers were also looking at the Indiana Jones property for Adventureland. In Disneyland’s existence, Adventureland was the only land that had not received an update in more than 30 years–since the 1964 Jungle Cruise additions. Dr. Jones would finally arrive in Adventureland in 1995. At the same time, the Jungle Cruise received a new two-story loading dock to replace the 1955 Harper Goff design. In 1999, the Swiss Family Treehouse closed and was re-imagined as Tarzan’s Treehouse. For the 50th Anniversary of Disneyland, Walt Disney’s Enchanted Tiki Room was revamped to add new seating, a better sound system and new “clothes” for the birds. It still retains the original 1963 show. Most of Adventureland is now themed to go along with the 1930’s Indiana Jones time period.

One of the ideas proffered by the Imagineering team for the Indiana Jones attraction was inspired by the runaway mine car from the 1984 motion picture Indiana Jones and the Temple of Doom…but Disneyland already had its own mine car ride with Big Thunder Mountain Railroad. As stated in Disneyland: the Nickel Tour: “In fact, some of the mine car effects heard in the film are actual recordings of the Big Thunder Mountain Railroad in action!” (Gordon, p. 340)

In The Art of Disneyland, there is some amazing concept artwork and the following image is one of my favorites.

This was one of the major blue sky ideas for a revamp of Adventureland that would have merged the Jungle Cruise, the Disneyland Railroad, the Indiana Jones Adventure and a mine car coaster (with a loop!) into one massive attraction.