In the Spring 2008 edition of The Disney Files, a DVC member publication, there is an article on the dedication of the Carolwood Pacific Room at the Villas at the Wilderness Lodge.

In the article, Michael Broggie (son of Richard Broggie) talks about Walt’s first miniature railroad in his Holmby Hills backyard. Roger helped Walt build the 1/8 scale railroad and Walt ran it from 1950-1953.

Young Michael Broggie, whose father, Roger, was one of the studio staffers who helped build Walt’s railroad, was among the few children outside of the Disney family to ride aboard the Carolwood Pacific.

“I vividly remember my first ride, straddling one of those train cars as it rocked back and forth,” Michael recalled. “I remember entering a long tunnel, which was absolutely pitchblack. You could hear the chugging of the engine echoing off of this long tunnel. You could smell and taste the coal smoke. You could feel the vibration of the track. Walt had created a sensational experience that touched every one of your senses. 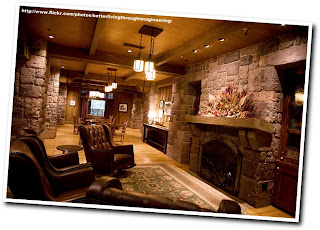 Decades later, with trains surrounding Disney Parks across the globe, Michael helped Imagineers assemble a detailed collection of Carolwood Pacific Railroad artifacts for the main gathering space of The Villas at Disney’s Wilderness Lodge. When the resort opened in 2000, everything was perfect. Almost.

“The Iron Spike Room name fit the railroad theme, but I wanted to see the name truly represent the backyard railroad that played such an important role in Disney history’, Michael said.

Remembering the “four Cs” Walt taught him during the early years (Curiosity, Confidence, Courage and Constancy), Michael worked through the years with Imagineers to change the name to the Carolwood Pacific Room.

“It looks fantastic,” Michael said as he unveiled one of two brass signs bearing the new moniker. “This is the real deal.” 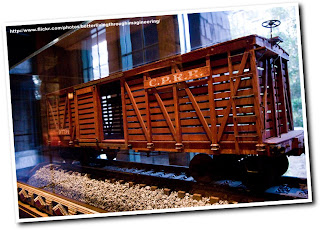 The case in the Carolwood Pacific room with the two trains from Walt’s Holmby Hills line has the following inscription:

In 1950, prior to Disneyland Park, Walt Disney created a miniature one-eighth-scale live steam railroad at his family’s Carolwood estate in the Holmby Hills area of Los Angeles. These are two of the original freight cars built in the Studio’s Machine Shop by Roger Broggie for the Carolwood Pacific Railroad. Passengers rode on the cars traveling over 2,615 feet of track that ran through-out the five-acre property on Carolwood Drive.

Special thanks to Tim Gerdes. He was gracious enough to share these photos from his flicker account at Better Living Through Imagineering.

For more information about Walt Disney and the Disneyland Railroad, check out these two titles: Walt Disney’s Railroad Story: The Small-Scale Fascination That Led to a Full-Scale Kingdom

and Welcome Aboard the Disneyland Railroad!