Editor’s Note: Over the past weekend, I was fortunate enough to spend some time with some friends at Disneyland–for research purposes, of course. We spent almost 2.5 hours in line for Space Mountain (it was supposed to be 30 minutes, tops) due to some mechanical difficulties. But 2.5 hours in line with fellow Disney geeks was a lot of fun. The mechanical troubles made me think of a post that Andrew had written 6 months ago. I thought it was appropriate to print it to share it with all of our new readers.

-Bruce Johnson, Imagineer, as quoted in Walt Disney Imagineering: A Behind the Scenes Look at Making the Magic Real 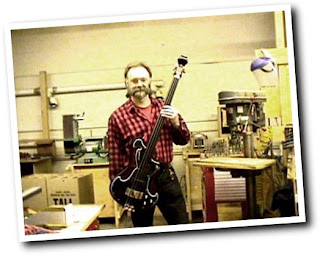 Bruce was a senior level mechanical engineer in robotics and advanced ride systems for Disney’s R&D throughout most of the 90’s. He credits a unique resume of varied skills and talents that led him to Disney. Towards the end of his tenure he gave advice for pursuing a career as an Imagineer in Disney Magazine (Winter 1995, page 49):

“Never pass up the opportunity to see new things, draw things, build things, talk to experts and learn new skills. I learned how to invent machines of all kinds over the years. I’ve worked as an auto mechanic, machinist, carpenter, factory worker, artist, concept engineer and many other trades. Some were for money and some were just for fun, but I learned from every one of them.”

Johnson now runs his own company with a name as unique as the instruments he creates. Johnson’s Extremely Strange Musical Instrument Co. is a passion-driven business where he handmakes instruments by request. He also runs another project under the moniker Johnson’s Rather Odd Custom Shop where he promotes himself as an inventor for hire:

Through the ’90’s, I worked at Walt Disney Imagineering, the company that designs and builds Disney’s theme parks. I was a senior-level mechanical engineer in the R & D division, where I specialized in robotic figures and advanced ride systems. Those were fun years, but the interesting work tapered off towards 2000, and I got out of it as I built up my musical instrument business.

Don’t forget to vote in the poll for your favorite old-school Imagineer. For all of our e-mail subscribers…don’t forget to hit the page to vote!