At MouseFest last year, Andrew and I got the chance to tour the Epcot Museum at Innoventions West with Glenn from Passamaquoddy. The museum is an amazing area with posters, photographs, pavilion models, cast member costumes, trivia and a lot more! We spent a long time talking to a cast member named Ray (not Grumpy) who has worked at Epcot for almost 24 years. 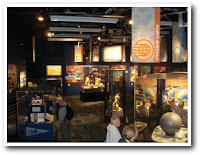 We have seen some of the pictures on other blogs around the time of Celebration 25 back in October, but the pictures just don’t do it justice. Along the wall are matted prints for each pavilion in Future World and World Showcase, each with architectural renderings, construction and Imagineer photos and historical information.

One of the cooler things was a poster of a speech that Ray Bradbury gave to the Imagineers back in 1981. We wanted to share it with you. 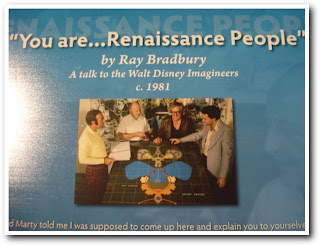 John and Marty told me I was supposed to come up here and explain you to yourselves…and to tell you what you are and what I am and what I am doing here. I’m here because I want to be here. There are a lot of places in the world I could be, but I’ve been coming through WED and going to for many years now and I like what I see.

A wonderful thing happened to me in 1954…I went to for the first time ever. I traveled through Rom and and . I saw the works of Fra Angelico and I came home inundated with the Renaissance. By a wonderful coincidence, a few months later I came out to the Disney Studio and wandered through and saw the sketches and the drawings and the paintings for “Sleeping Beauty.” I said, “My God…this is fantastic, that I’m seeing work here commensurate with many of the things that I saw in Renaissance Italy when I visited there for the first time…”

And so, really, what you are is Renaissance People. If there ever was a Renaissance organization, this is it. You haven’t peaked yet, but you’re peaking, and sometime in the next twenty years when you peak completely, the whole world’s going to be looking at you…

Buckminster Fuller lectures us on how to change the World and yet the only people I see who are successful at changing the World are right here—people with very special dreams. We’re acting out what Schweitzer often spoke of in his philosophies years ago. He said, “…set a good example for the World. If you are excellent, if you are of high quality, the World will imitate you.”

What we’re doing here is inventing a “Schweitzer Centrifuge” … That’s the way I look at the EPCOT Project. If we build all of this correctly, if we build it beautifully, if we set an example for the World, we can change the whole damn country. That’s how important you are. That’s how important I feel, working with you. People will come from all over the World; they’re already doing it at Disneyland and Disney World—when you get people like Hirohito, or you see Kruschev pounding at the door and not able to get in—and being irritated by it—you know you’ve got something. And so, what we’re going to do in the next year and the next five years and the next thirty years is change our own country, only for the better. And after that—the world.

It’s a big project. But of all of the groups in the world, while everyone else is busy talking, you’re doing the stuff that’s really going to count.

The John and Marty referred to at the beginning of the speech are John Hench and Marty Sklar. Probably two of the most influential Imagineers that worked with Walt Disney. They were charged with carrying out his final dreams. They were true Renaissance people. Ray Bradbury gave this speech to help motivate the Imagineers while they finished the massive Epcot project. At the time it was the world’s largest and most expensive construction project.

A little daunting, wouldn’t you say? 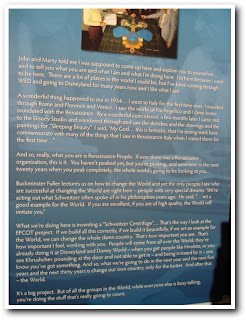