As we’ve shared in two earlier posts, we ran into quite a few books during MouseFest this past December. Some were real and some were artfully created by the Imagineers.

While on a personal JSI (Jeffica Scene Investigation) with Jeff and Jessica, we spent some time at Restaurontosaurus at the Animal Kingdom. We didn’t eat there…even though we were hungry, but we spent time taking in all of the amazing details that make the restaurant truly special.

For more background (and some great details), take a look at two of Jeff’s posts from back in October 2007 and November 2006. Jeff provides quite a bit of background material that will make your next trip that much better. One of the details that caught our attention was the amount of books that we found throughout the restaurant. Some real…some, uh, not. 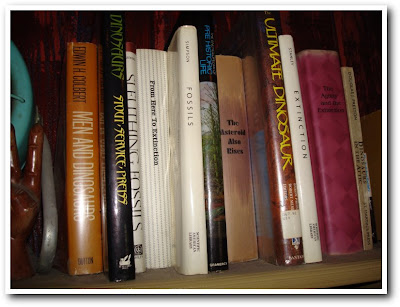 A few of the titles actually exist. Let me share the more fictional titles with you:

The last book on the shelf is Dinosaurs in the Attic by Douglas Preston. A real book by a great author. It is about the history of the American Museum of Natural History. So it fits perfectly!