For the longest time, the center of Walt Disney World has resided in Epcot. When the park opened in 1982, a point in Future World near the Fountain of Nations served as the geographic center of the WDW property. Due to changing property boundaries over the last 25 years, the center has shifted slightly, but remains close to this geographical center. This center is marked by an imprint of the original Epcot Center logo embedded in the ground at the exact nucleus of Walt’s master vision.

This original Epcot logo can be seen here: 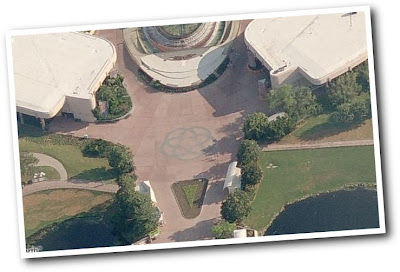 It is fitting, as we exit the 25th anniversary, that we examine the true center of WDW: Epcot Center. Epcot Center, you say? Ah, yes….rumor is that soon enough it will don the moniker for a second time, hopefully bringing the park back into focus. Author Robert Collier poignantly centered the topic of Epcot Center when he said:

“The source and center of all man’s creative power. . . is his power of making images, or the power of imagination.”

I present that Epcot needs centering again. A steadying hand to return the park to its rightful place as the marrow in the bones of Walt Disney World. With the changes that have come post-Eisner, we can be hopeful again that a concept created in the 60’s and realized in the 80’s will refocus in the next 25 years.

I dream, I test my dreams against my beliefs, I dare to take risks, and I execute my vision to make those dreams come true.

Walt’s plan to dream, dare, and execute should drive Epcot Center through the next 25 years. Hopefully after a full 50, Disney will look back at the second 25 as a renaissance of sorts. A fulfillment of unrealized potential, a stewardship of near sacred ideals and growth that will inspire us as we had always hoped Epcot Center (1982) would. In 2006, new Principal Creative Advisor John Lasseter stated publicly that he wanted the Walt Disney Imagineers to return to their storytelling roots and rebirth under the old name, WED Enterprises. He felt the Imagineers had relied too heavily on technology and had lost the spirit of the original WED Enterprises. This move is nice way to bring the Imagineers’ task with Epcot Center (2007) back into focus, in other words, back to its center. The recent upgrades to Spaceship Earth are the perfect example of positive creative force in re-centering an attraction that so completely anchors the park. The story is more linear and focused, the scenes are more effective at evoking wonder and the effects have more wow factor. When I experienced version 2.0 recently, I was 21 again, back in the spirit and mind of the kid who rode this for the first time so many years ago. Serendipity….. 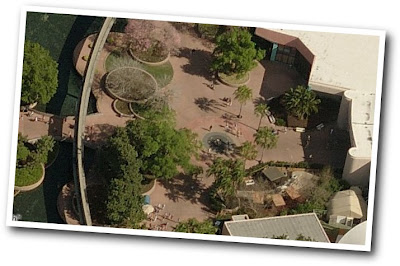 More recently, the geographic center was considered the Inventor’s Circle between Innoventions West and The Land Pavilion. No one is really sure since so much property has been bought and sold recently.

Not only do we think of the physical geographic center of Walt Disney World, but we need to ponder the center of Walt Disney World that resides in each of us Disney Geeks. Yeah, right there. The place that makes you smile when you think of your favorite ride, family moment or WDW sweet spot (ed. note–that place that makes you stop and take a deep breath–like right outside the bakery on Main St. or on Soarin’). The internal fire that Disney continually lights led our online community to celebrate the first 25 when even Disney would not acknowledge the significance of the anniversary.

It is why we keep coming back and why we try to share our tips and knowledge with everyone we meet.

6 thoughts on “Daily figment 139: The Center of Walt Disney World”