Here at Imaginerding, we extol taking your time while you’re at Disney. Time to stop and notice the little details. Besides helping to center yourself, you are reminded of why you are at a Disney park.

At MouseFest, we spent a lot of time hanging out with people and making friends. But the lure of the rides was too much to take (a siren song?). So, we spent some time paying attention in the queues. While in the FastPass line for Big Thunder Mountain, you actually skirt the outside of the main queue. This gives you plenty of opportunities to check out what is around Big Thunder. We stopped and took pictures (I won’t tell you how many) and we easily let about 30 other people pass us we enjoyed the details all around us. 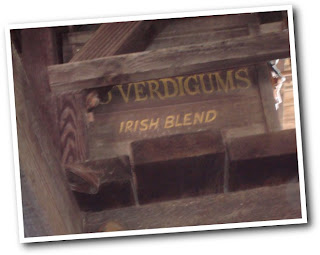 Once we made it to the ramps that lead you to the loading area, I noticed this crate hidden up in the rafters. It was hard to get a picture since the light was so dim and the crate was in the rafters. The crate says:

It took me saying the name 2 or 3 times before Andy got it (he is blonde, ya know!).

This is basically a play on the Irish bar toast “Through the lips, over the gums, watch out stomach, here it comes.”

Doing the research for this post made me realize that I wasn’t sure why we called it a toast. I mean I love toast–a little butter, some jam…uh…anyway, here is the entry from wikipedia:

The practice of toasting originated in Ancient Greece, at a time when fear of poisoning was a significant concern. To put guests at ease, the host would pour the guests’ wine from a common decanter, take the first drink to demonstrate its safety, then raise his cup to the guests and invite them to drink in good health.

The word ‘toast’ became associated with the custom in the 17th century, based on a custom of flavoring drinks with spiced toast. The word originally referred to the lady in whose honor the drink was proposed, her name being seen as figuratively flavoring the drink.

So, you never know what you’ll find, or where you’ll find it. Is this a subtle reference to the ride? Does it have something to do with the original mine workers? What about Rainbow Ridge in Disneyland? Was there a tavern there? Big Thunder at the Magic Kingdom takes place in a town called Tumbleweed…has anyone seen a saloon there?

Our friend Dave at Davelandblog has a some really great shots of Rainbow Ridge. Make sure to leave him some Disney Geek love. And if you scroll to the bottom of the pictures, you will see a picture of Pat Casey’s Last Chance Saloon.

Here is a toast for you: 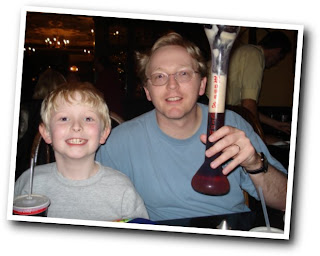 Mongello!
Don’t forget to stop by our site and leave some Disney Geek love!