For our first details post, we wanted to call your attention to the Disney Geeks favorite ride: Splash Mountain.

After riding Splash Mountain for the second time on the first day of MouseFest and after meeting two Canadian podcasters (you can do the math), we spent a lot of time checking out the details of the queue. Both the entrance and the exit. Although we did take a lot of pictures of undocumented Splash Mountain crates, we found some really great details near the exit of the ride. I can only imagine the looks that Andy and I got as we took pictures of walls, boxes, crates and light fixtures. 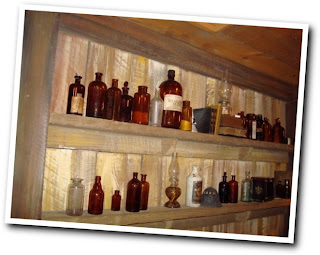 Everyone stops at Splashdown Photos to see the picture of themselves after being tossed down Chickapin’ Hill into the briar patch. While most people blew by us to get to another attraction, Andy and I took a few moments to stop, look around and savor the details. I was amazed at the intricate theming that took place in the Splashdown Photos area. Most people would have just seen a cattle line with slightly wet people waiting to pick up their picture.

The walls are covered with odes to the art of developing pictures. There are bottles of glycin, bicarbonite of soda, developer fixitive fluid, potassium bromide, photographic paper and old cameras. Of course, there were also some books scattered throughout the shelves. 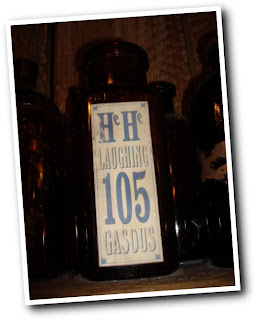 One of the tongue-in-cheek details that I discovered was the bottle in the picture on the left. It is on the shelf in the first picture.

There are some obvious ties to Splash Mountain on the label. He He and Laughing Gasous relate to the Laughing Place.

But what about the 105? It doesn’t match helium or nitrous oxide with a wikipedia search. Any thoughts?

Once again, we implore you to take a moment and look around while you are in the theme parks. You will be amazed at what you can see.

Speaking of noticing the little details, our blogging friend Richard Harrison, over at Photos From the Parks, has done a great series on the Tiki Gods. Make sure to stop by his site and leave him some Disney Geek love (comments, baby!):

Addendum: Richard has added a Tiki Room tag to his series to make it easier to pull them up!

Thanks go to Jeff Pepper for the inspiration for this series. By the way, he did our logo. Awesome, ain’t it?